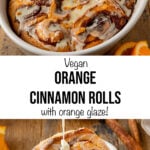 These Vegan Orange Cinnamon Rolls are made with a sweet orange dough, a thick layer of cinnamon sugar filling, and topped with the most delicious orange glaze! They truly are the best cinnamon roll to make overnight and eat for breakfast or brunch the next day.

Cinnamon Rolls are probably one of my FAVORITE recipes to make- especially since they're actually pretty easy to make vegan, dairy-free, and eggless. While I do have some more traditional Vegan Cinnamon Rolls on SGTO, I've also made some pretty fun flavors like Carrot Cake Cinnamon Rolls and even Funfetti Cinnamon Rolls!

These orange rolls are a new favorite as they feature the same cinnamon sugar flavor you have grown to love, but with a sweet citrus twist. In fact, they taste just like my childhood favorite Pillsbury Orange Rolls...but even better!

While the full list of ingredients is in the recipe card, here are a few important key ingredients:

How to make orange cinnamon rolls:

Take the dough out of the bowl and knead it on a well-floured surface. You can also knead the bread using the bread hook in a standing mixer if you have that option!

You will know the bread is done when it is elastic and can easily be stretched without tearing.

Take the kneaded dough and add it to a well-oiled bowl. I lightly greased my bowl with olive oil, but any oil works!

Then, cover it with a towel or plastic wrap and let rest in a warm place for 1 hour or until it has doubled in size.

Once the dough is ready, make the cinnamon sugar filling by adding room temperature vegan butter, brown sugar, cinnamon, and orange zest to a bowl. Then, mash together until a thick cinnamon-sugar mixture forms.

You can also pulse this together in a food processor if you don't want to manually mash it!

Take the finished cinnamon roll dough and roll it into a large 1" thick rectangle. Don't roll the dough too thin or it will be hard to roll up later.

Then, use a spatula to add on the orange and brown sugar cinnamon filling, making sure to leave a small border along the edges of the dough.

Then, roll the dough into a long log and pinch the dough ends together to seal.

Use a VERY sharp knife or floss to cut the cinnamon rolls into 10 large pieces.

Take the cinnamon rolls and place them into a baking dish. They should be touching, but not smushed together.

Then, cover and add to the fridge to rise overnight or for about 6-8 hours. They will double in size overnight for the second proof.

If you want to eat the orange cinnamon rolls sooner, just cover and let rise at room temperature for an hour before baking vs. overnight in the fridge.

Remove the cinnamon rolls from the fridge and preheat the oven. Once it's preheated, bake for 35-40 minutes until the orange cinnamon buns are fully cooked inside and beginning to brown on top.

Then, drizzle on the orange icing and dig in!

Unfortunately, no. When it comes to yeasted recipes gluten is needed to hold the bread together.

How do I store orange sweet rolls?

Leftover orange sweet rolls can be stored in a closed container at room temperature for 48 hours, in the fridge for 4-5 days, or in the freezer for up to 1 month. I recommend storing between sheets of parchment paper so they do not stick together!

Can I make these cinnamon rolls without yeast?

No, this recipe requires yeast to work.

I can't wait for you to make these absolutely delicious Vegan Orange Cinnamon Rolls. With ooey-gooey cinnamon swirls and sweet orange icing on top, they are truly addicting! 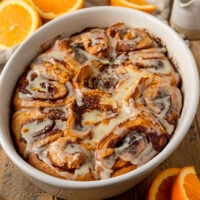 Make the Filling & Add to Dough: