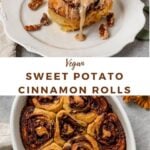 These Vegan Sweet Potato Pecan Cinnamon Rolls are truly the best Fall treat. Whether you eat them for breakfast, dessert, or alongside Thanksgiving leftovers, there is no denying these sweet potato rolls topped with a maple spice glaze are SO fluffy, perfectly sweet, and absolutely delicious.

I know vegan cinnamon rolls can seem complicated, which is why I'm including process shots and a video to help you make this recipe!

Once you have all the ingredients ready, mix the active dried yeast & almond milk together and let sit 3-5 minutes. This step is only necessary if using active dried yeast, so if you have instant yeast just skip this step and add the yeast directly to the flour.

Once the yeast is activated mix in the other wet ingredients including the sweet potato, sugar, melted vegan butter, and vanilla.

Next, gradually add the flour and salt and mix into a rough dough.

At this point, you can either knead the dough by hand or switch to a dough hook to knead in a standing mixer.

As you can see, I chose to knead the dough by hand! I love kneading in my KitchenAid Standing mixer, but every once in a while it's nice to knead by hand to really see what the dough should feel like!

A well-kneaded dough should be tacky, not sticky, and should be able to be stretched easily without tearing. It will also not be too lumpy and will be smooth. This tends to take anywhere from 5-8 minutes in a standing mixer or 8-10 minutes by hand.

Then, add the dough to a well-oiled bowl (I use olive oil) and cover with plastic wrap or a tea towel to let sit until doubled in size.

You will know the dough is dough with the first rise when it can be indented with a finger and springs back slowly, not quickly.

Roll into a rectangle

At this point, lightly flour your surface and get the rolling pin ready to go. I like rolling my dough out on a marble pastry board because it keeps the dough cold. Then, roll the dough into a large rectangle about 1 inch thick.

In a separate bowl cream the softened butter, brown sugar, and cinnamon together. Then, use a spatula to spread the filling onto the dough and top with crushed pecans.

After adding the filling, roll the dough into a log. Once you reach the end it's important to pinch the dough end together to seal it. Then, flip the dough log over so the pinched side is facing down.

Add to pan and let rest 30 minutes before baking

At this point, you can either let the rolls rest another 30 minutes in a warm place before baking or you can cover them and add them to the fridge to rise overnight. Either way works and both are delicious, though the yeast flavor of cinnamon rolls becomes more prominent in rolls left to rest overnight.

After letting the rolls rest, Bake at 350F for 30-35 minutes until cooked through and browned on top. The filling may ooze out a bit, but honestly, it makes for the most delicious crispy sugar bits on top! Better that than not enough filling- right?!

The last step is to cover the rolls with the maple spice glaze.

This is totally optional, but it is a mix of maple syrup, almond milk, cinnamon, and powdered sugar. You could also swap this for a vegan cream cheese frosting or even coconut whipped cream. Basically, any topping works. Once the glaze is on, dig in!

Yes! Making vegan cinnamon rolls refined sugar-free is actually pretty easy! Just sub the sugar in the dough and in the filling with coconut sugar or maple sugar. It's really important to use granulated sugar for the right texture here.

Can I make cinnamon rolls gluten-free?

Unfortunately, not with this recipe. Gluten formation is super important for this recipe.

You could try making them with a gluten-free flour mix, but I will be totally honest that they will not rise and proof as they are intended to.

How do I adjust baking time for a larger or smaller pan?

For this recipe, I do not recommend baking in a smaller pan. Otherwise, your cinnamon rolls will likely pop out as they will be too smushed in the pan.

However, you could definitely bake these in a larger 9* 13-inch baking dish. In that case, you will want to cut the cinnamon rolls into thinner slices to fill the pan and they will cook faster (likely 20-28 minutes).

How do I store cinnamon rolls?

Luckily, cinnamon rolls store great as leftovers! It is best to store cinnamon rolls unglazed, but even if the glaze is already on they will store well in a closed container at room temperature for 24 hours, in the fridge 3-5 days, or in the freezer for up to 1 month.

I always store mine in the freezer as I find the fridge tends to dry out bread quickly!
To reheat just microwave or heat in the oven at a low temperature such as 200F until warmed throughout.

I truly hope you love these fluffy & eggless Sweet Potato Pecan Cinnamon Rolls! They are the perfect Thanksgiving treat, great for a brunch with family & friends, and happen to store great as leftovers too. Enjoy! 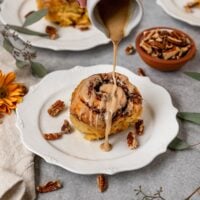