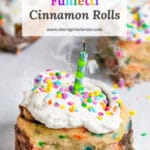 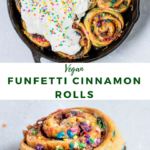 To celebrate SGTO's 1 year anniversary I'm sharing the BEST Vegan Funfetti Cinnamon Rolls smothered in the absolute best coconut whipped cream frosting. Plus, you know I had to cover these sprinkle-filled cinnamon rolls in, you guessed it, more rainbow sprinkles!

The most important thing I learned this year is that magic happens when you step outside your comfort zone.

Before blogging I had never dared to touch yeast dough and now it is my favorite type of baking to do. I knew it was only appropriate I celebrate this monumental day with these ooey-gooey sprinkle filledFUNFETTI CINNAMON ROLLS!

How to make the best funfetti cinnamon rolls

If you came here for a healthy recipe today, walk away now. However, if you're here for a decadent treat, you are in the right place.

These buns start with a funfetti dough that is then filled with more sugar, butter, cinnamon & sprinkles for a dairy-free & eggless treat. Here is a quick snapshot of the ingredients you need to make these cinnamon rolls:

The first step to making any vegan cinnamon roll is to make and knead the dough. Start by adding the yeast, almond milk, and sugar to a large bowl and letting the yeast sit for 5-10 minutes to make sure it is activated.

Then, gently mix in the melted butter, lemon juice, and vanilla. After that gradually add in the flour and salt until a thick dough forms. After that, knead the dough until it is nice and elastic.

I prefer using a standing mixer with a bread hook to knead bread, however, you can knead any dough by hand. If kneading by hand, mix the dough in a bowl to form a thick dough, then remove and knead by hand.

The dough is ready when it is stretchy, no longer sticking to the sides of the bowl, and when the dough does not break apart easily when stretched.

Next, let the vegan dough rise for the first time

For the best flavor, let the dough rise covered in a warm place. Make sure to oil the bowl before you add the dough and cover the dough to avoid it drying out. The rainbow cinnamon roll dough has proofed when it no longer springs back into place after you press into it.

After the first rise, roll the vegan cinnamon roll dough into a rectangle that is ¼-1/2 inch thick in height.

Then, fill with the cinnamon sugar filling. To do this add the cold butter, brown sugar, vanilla, and cinnamon to a food processor until well mixed and thick. This step can also be done by hand, though it is a bit more work.

After that, add in the rainbow sprinkles and mix them by hand into the cinnamon roll filling. Spread the filling out across the dough rectangle leaving a thin border along the outside.

To finish roll the dough into a log and then cut into 10 even slices.

Place the sliced cinnamon rolls into the baking pan (I used an 11-inch skillet). If you want to enjoy the funfetti buns for breakfast, cover the skillet with plastic wrap and let sit in the fridge overnight for 8-12 hours before baking.

If you want to enjoy the rainbow cinnamon rolls the same day, cover them and let them rise for at least 30 minutes- 1 hour in a warm place before baking.

Once the second rise has finished, preheat the oven to 350F and bake those buns for 35-40 minutes until cooked through.

To make these funfetti cinnamon rolls even better, I topped them with my favorite coconut cream frosting and, you guessed it, more sprinkles!

To make coconut cream frosting you only need these ingredients:

The really important part about making this frosting is to use ONLY the thick coconut cream (not the watery coconut milk). Also, make sure to sift the powdered sugar before adding it to the coconut cream so that no large chunks form.

As a final step, add on tons of vegan rainbow sprinkles! I used India Tree Carnival sprinkles in the dough and India Tree decoratifs as a topping.

I hope you love these Vegan Funfetti Cinnamon Rolls as much as I do. Here's to many more years of blogging, connecting with you amazing people, and lots more sprinkles in all of our lives. Cheers! 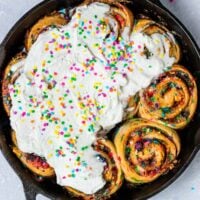