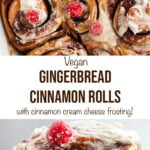 Every December I find myself craving cinnamon rolls for the Holidays. In previous years I've made my Orange Cinnamon Rolls or Cranberry Sticky Buns, but this year it's all about gingerbread!

While gingerbread cookies are always a classic, these ginger cinnamon rolls have all the same spicy-sweet flavor with added gooey goodness!

*This image does not include the cream cheese frosting ingredients. For this, you will need vegan butter, vegan cream cheese, cinnamon, nutmeg, and powdered sugar.*

How to make gingerbread cinnamon rolls

First, bloom the active dried yeast in warm water. Then, add in the melted vegan butter, sugar, molasses, and vanilla.

Whisk together and gradually mix in the dry ingredients including the flour, cinnamon, ginger, and salt. The dough will look a little rough at this point but will get smooth as you knead it.

Then, knead the dough by hand or in a standing mixer with the bread hook until smooth and elastic.

Add the gingerbread bread dough to a well-oiled bowl, cover, and let rise until doubled in size (about 1-2 hours).

While the dough is rising, make the cinnamon roll filling. Add room temperature, brown sugar, cinnamon, ginger, and nutmeg to a food processor and blend together into a thick paste.

You can also mash together by hand with a fork, but it does take a bit more effort!

Punch down the dough and roll it into a rectangle. Then, use a spatula to evenly spread the spiced cinnamon sugar filling over the dough.

Make sure to leave a border along the edges of the roll so you can seal it together.

Then, roll the dough into a log and pinch the dough seems together.

Trim the ends, then use a bread knife to slice the roll into 10 evenly sized gingerbread cinnamon rolls.

Add the sliced gingerbread rolls to an oval pan and then cover with plastic wrap. Store in the fridge overnight or let the cinnamon rolls rise at room temperature for another hour.

In the morning, remove the gingerbread sweet rolls from the fridge and preheat the oven to 350F. Then, top them with plant-based creamer.

You can also use full-fat coconut milk or even a little oat milk. This step helps the cinnamon rolls stay moist while baking and makes them so gooey & delicious!

Then, add the tray to the oven and bake for about 30 minutes until cooked through, bubbling, and browned on top.

Cream together the vegan butter, vegan cream cheese, and cinnamon. Then gradually add in the powdered sugar and whip into a fluffy frosting.

Spread the frosting over the gingerbread sweet rolls and then top with sugared cranberries. Serve & enjoy these Christmas cinnamon rolls!

How to store vegan gingerbread rolls

If frosted, I don't recommend reheating the gingerbread rolls- they should instead be eaten at room temperature. Otherwise, the frosting will completely melt.

If you store the gingerbread rolls unfrosted you can reheat them in the oven or microwave before frosting them and enjoying!

I can't wait for you to try these Vegan Gingerbread Cinnamon Rolls. With cinnamon cream cheese frosting & sugared cranberries on top, they truly are the perfect Holiday dessert or Christmas morning brunch!

More gingerbread recipes you will love: 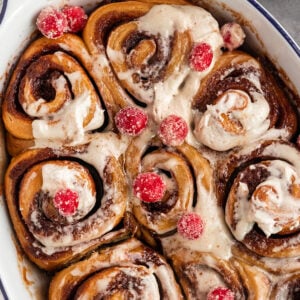 Make the filling and add to the dough