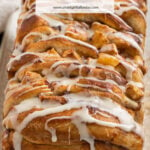 This Vegan Apple Fritter Bread combines layers of yeasted cinnamon dough with homemade apple butter and gooey cinnamon sugar apples. If you're looking for a show-stopper dessert to make this Holiday season- let this apple bread be it!

This dessert is an apple-filled combination of some of my favorite SGTO recipes. Since you loved my apple pie cookies, I knew I wanted to make sweet bread using a similar apple pie filling.

The best way I knew how? To follow the method I used to make my Vegan Garlic Pull Apart Bread. It all came together when I added layers of homemade apple butter for a truly delicious Fall dessert.

How to make apple fritter bread:

First, activate the dried yeast in warm water. Then, mix in the sugar, melted vegan butter, and vanilla.

After that gradually add in the flour, cinnamon, and salt and mix into a shaggy dough.

Once you have a shaggy cinnamon dough- it's time to knead the bread! You can do this in a standing mixer with the bread hook for about 5 minutes or by hand on a well-floured surface for 8-10 minutes.

The dough is ready when it is smooth, elastic, and can be easily stretched without tearing.

Add the kneaded dough to a well-oiled bowl, cover, and let rise until doubled in size.

While the dough is rising, peel and dice your apples. Then, add them to a mixing bowl with the sugar and cinnamon and mix together.

Roll out the dough

Once the dough has doubled in size, punch it down and form it into 8-9 smaller balls.

Then, use a rolling pin to roll each dough ball out into a flat disc.

Spread the apple butter onto the rolled-out bread discs. Then, add a few scoops of cinnamon sugar apples.

Fold each bread disc in half so it resembles a taco and add them to a parchment-lined pan.

Layer them into the dough and stuff any extra apples between the layers of dough. Then, cover and let rise for another 30 minutes while the oven preheats.

P.S- this is the loaf pan I used in this recipe.

Add the bread to the oven and bake for 40-45 minutes until cooked through. The tops will be browned and the filling will be bubbling when the bread is done.

Unfortunately, no. Yeasted bread recipes depend on gluten formation for structure so this is one recipe you easily adapt to make gluten-free.

How do I store apple bread?

Apple bread can be stored wrapped in tin foil or in a closed container in the fridge for 3-4 days.

You can also slice it and store the slices in a closed container in the freezer between layers of parchment paper for about 1 month.

I can't wait for you to try this absolutely delicious Vegan Apple Fritter Bread! It's filled with chunks of gooey sweet apples and is such a delicious Holiday dessert. Enjoy! 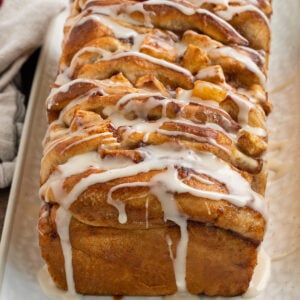