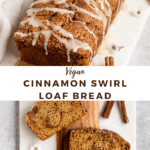 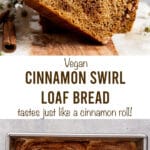 This Vegan Cinnamon Bread is easy to make, SO moist, eggless, & dairy-free too! No yeast is needed to make this dairy-free cinnamon swirl quick bread that tastes just like a cinnamon roll.

I know many of you are excited that I am FINALLY sharing this recipe after a few sneak peaks on my Instagram. Every time I share a loaf bread recipe (like my Tahini Banana Bread or Vegan Date Cake), it's always a hit!

Well, you can add this eggless cinnamon bread to the must-make list because it may be the best one yet!

Before we jump into some tips & tricks to make this vegan cinnamon cake, here are the ingredients you need to make this cinnamon loaf cake:

How to make vegan cinnamon bread

Here's how you make this no yeast cinnamon bread in just a few easy steps!

Mix all the ingredients in one bowl

First, add the wet ingredients like the oat milk, apple cider vinegar, applesauce, sugar, brown sugar, oil, and vanilla to a bowl and whisk together.

Then, add in the dry ingredients. Always make sure to add the flour first, then pour the baking powder, baking soda, salt, and cinnamon on top. This helps to make sure the leavening agents get mixed evenly within the batter and don't clump up.

Do NOT overmix the batter. This means mixing the batter JUST until all streaks of flour are gone. It's actually okay if there are some lumps in the batter.

Over-mixing batter can lead to a super dry & gummy bread which we want to avoid. Basically, you should end up with a slightly thick batter with some lumps in it as pictured below.

This part is pretty easy, but in a smaller bowl add in the remaining sugar & cinnamon and whisk together. Then, set aside.

Repeat this two more times, ending with a thin layer of cinnamon sugar on top. This will provide a nice crunchy topping that is honestly SO good. Do one final swirl with the knife and then add to the oven to bake!

This eggless cinnamon cake takes a decent time to bake because we want to make sure the inside is cooked through completely.

After baking, run a butter knife along the outside of the pan to loosen any stuck pieces. Let the bread cool for about 10 minutes in the pan, then remove the cinnamon loaf and place it on a drying rack to cool completely.

It's super important to use a drying rack to cool vegan quick bread so that the bottom doesn't get too moist and soggy. Once the bread is completely cool, top with the optional vanilla icing and serve!

How do you make vegan quick bread moist?

There are two main ingredients that make this vegan cinnamon roll bread super moist even with a long baking time.

The first is applesauce which provides tons of moisture and also acts a bit like an egg replacement to bind the ingredients together. The second item is actually the sugar itself!

Sugar provides a lot of moisture to the recipe, which is why I never recommend reducing the sugar.

Can I make cinnamon bread gluten-free?

Yes! If you can find a 1:1 baking flour such as Bob's Red Mill, that will work subbed 1:1 in volume for the all-purpose flour in this recipe.

Please keep in mind other flour substitutes like almond flour or coconut flour will NOT work with this recipe as it is not an easy substitution.

Can I make this recipe refined sugar-free?

You can definitely try, but I do want to note that sugars like coconut sugar or maple sugar are drier than cane sugar or brown sugar. Therefore, you are going to have less moist bread if using a different sugar.

Can I make cinnamon bread oil-free?

Yes, this is actually pretty easy to do! Just swap the 3 Tbsp of olive oil for 3 Tbsp of additional applesauce.

The reason I like a mix is that olive oil tends to make bread recipes more tender, less dense, and leads to a better crumb. However, if you just use applesauce the bread will still taste great, it will just be denser.

How do I store this cinnamon loaf cake?

Cinnamon bread can be stored at room temperature for 1-2 days wrapped in tin foil or plastic wrap. However, it is actually best stored pre-sliced in the freezer.

To store in the freezer, slice the bread and then store between layers of parchment paper in a closed container. Also, I do not recommend refrigerating leftover bread as it tends to dry it out.

I truly hope you love this Vegan Cinnamon Loaf Bread! The cinnamon sugar swirls give it so much flavor & it's such an easy recipe to enjoy for dessert or even for a special breakfast treat. Enjoy! 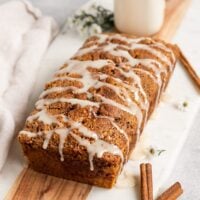