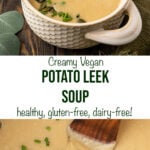 If you've never tried potato leek soup, what are you waiting for?! This Vegan Potato Leek Soup is made with a secret ingredient to make it extra creamy and filling without any dairy needed. It's a healthy, gluten-free, & nourishing soup recipe you will love!

I first tried Potato Leek Soup at an airport lounge. Yes, it's super random, but it was the only food I could eat in the buffet and after traveling all day it honestly tasted like the best soup I had ever had. After trying that soup, I knew I had to recreate my own creamy vegan version for you!

Like my Carrot Cauliflower Soup and Vegan Broccoli Soup, this is a blended soup that is thick, creamy, and can be made in just one pot!

This involves chopping the leeks and peeling and chopping the potatoes. It's really important to rinse your leeks after chopping to remove any dirt and to only use the stalks of the leaves and to not use the tough leek ends.

Here is a guide on cleaning and slicing leeks for reference.

Don't discard those leek stems though! You can rinse them and then store them in a freezer-safe bag to make vegetable stock later. It's one of my favorite ways to cut down on food waste!

When it comes to the potatoes, just make sure to not chop them too small. If they are too small, they will cook too quickly and release too much starch into the soup, making it kind of slimy and gummy.

Once the veggies are prepped, melt the vegan butter in a large pot or dutch oven. Then add in the leeks and spices.

This step is crucial to bring flavor to this potato leek soup as sauteing the leeks gives them a really good depth of flavor.

P.S- here is the Le Creuset Dutch Oven I used. It's pricey, but I have found it more than worth the investment as I use it all the time.

Once the leeks are cooked, add in the peeled diced potatoes, cannellini beans, veggie broth, and bay leaves. You can also add additional salt & pepper to season at this point.

Bring the potato leek soup to a boil, then reduce to a simmer, cover, and cook for 10-15 minutes.

The potatoes should be easily piercable, but not falling apart or mushy (which would mean they're overcooked). The key to a really good vegan potato soup is to NOT overcook the potatoes for the right texture.

Blend the soup until thick

First, remove the bay leaves from the soup as you don't want to eat them.

Then, use an immersion blender to blend up the vegan potato soup until it's thick and creamy. You can also blend the soup in a large blender, but you'll want to let it cool slightly before blending if using this method.

This is the immersion blender I used and love!

Serve with any toppings!

I chose to keep things really simple and just added some freshly chopped chives and pepitas to this potato leek soup.

However, some other great toppings could be chili oil for a kick of spice, crispy leeks (check out my Vegan Lemon Butter Pasta with charred leeks for reference), or even some homemade vegan bacon. Fresh microgreens are a great addition as well!

Why is my potato leek soup gummy?

This is likely due to overcooking the potatoes. If you chop the potatoes too small or cook them too long, they will release too much starch into the soup and it could become slimy and gummy.

The best way to avoid this is to make sure you are using the right type of potatoes (russet or Yukon work best) to make this soup. Also, make sure not to overcook the potatoes for the best results.

Is there a substitute for the cannellini beans?

Yes- you can substitute cooked chickpeas 1:1 in this recipe.

If you want, you could also substitute in 1 cup of soaked cashews, but you'll have to blend it with some of the veggie broth before adding it to the soup. Other dairy substitutes don't really work in this recipe as they won't provide the same thickness.

How do I store potato leek soup?

Is potato leek soup good for you?

Ultimately, you have to answer this question for yourself, but this soup is incredibly filling, packed with protein, and has fresh vegetables too. It's a great addition to any meal and, because of the beans, it's actually a great source of plant-based protein too.

I can't wait for you to try this Vegan Potato Leek Soup with white beans. It's super creamy without any cream needed for a nourishing vegan soup recipe. 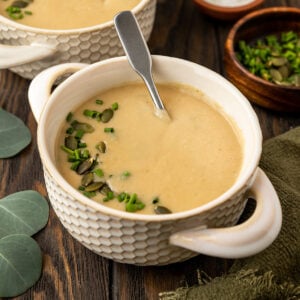