It's only appropriate to make a very special Vegan Funfetti Cake to celebrate ShortGirlTallOrder's two year anniversary today!  Three layers of sprinkle filled vanilla cake topped with vegan buttercream make this one of the best Birthday cakes you'll ever make! 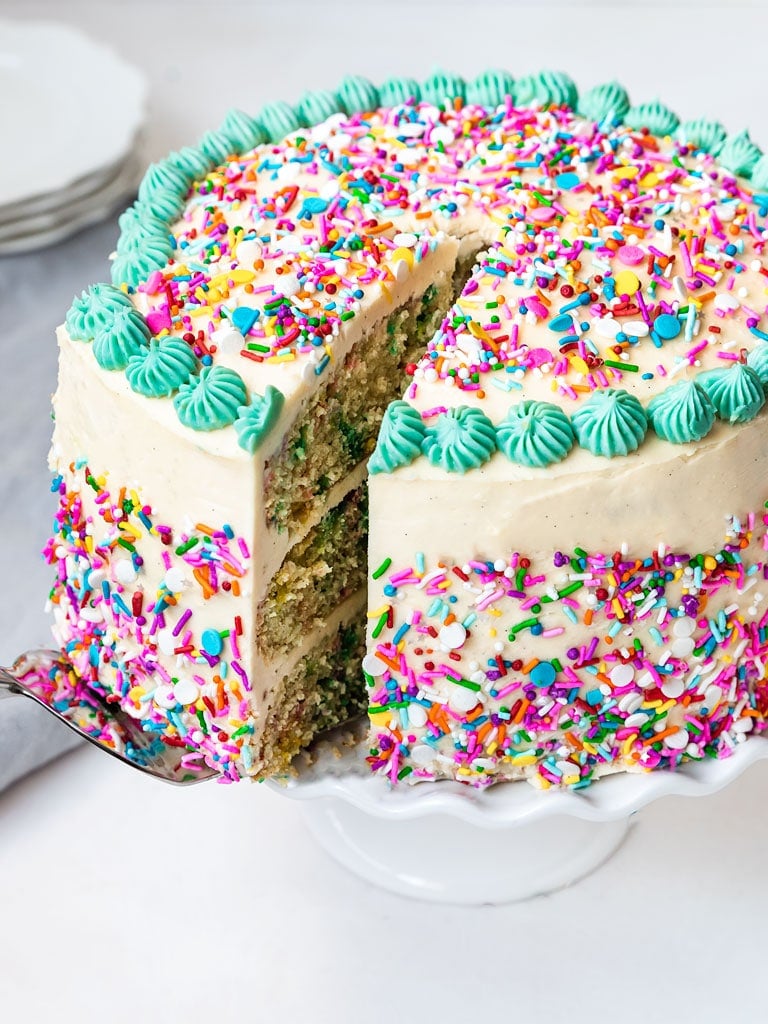 Wow, I can't believe ShortGirlTallOrder is two years old today! They say time flies when you're having fun, and I can tell you this blog is the most fun I've ever had.

You may remember that last year I celebrated my very first blogging anniversary with Vegan Funfetti Cinnamon Rolls and shared a quick recap of my biggest lesson learned in my first year of blogging.

Since then so much has changed. Most importantly, I've gotten to show people that plant-based cooking can be exciting, fun, and definitely NOT boring! I mean- hello?! This Vegan Funfetti Layer Cake proves that! 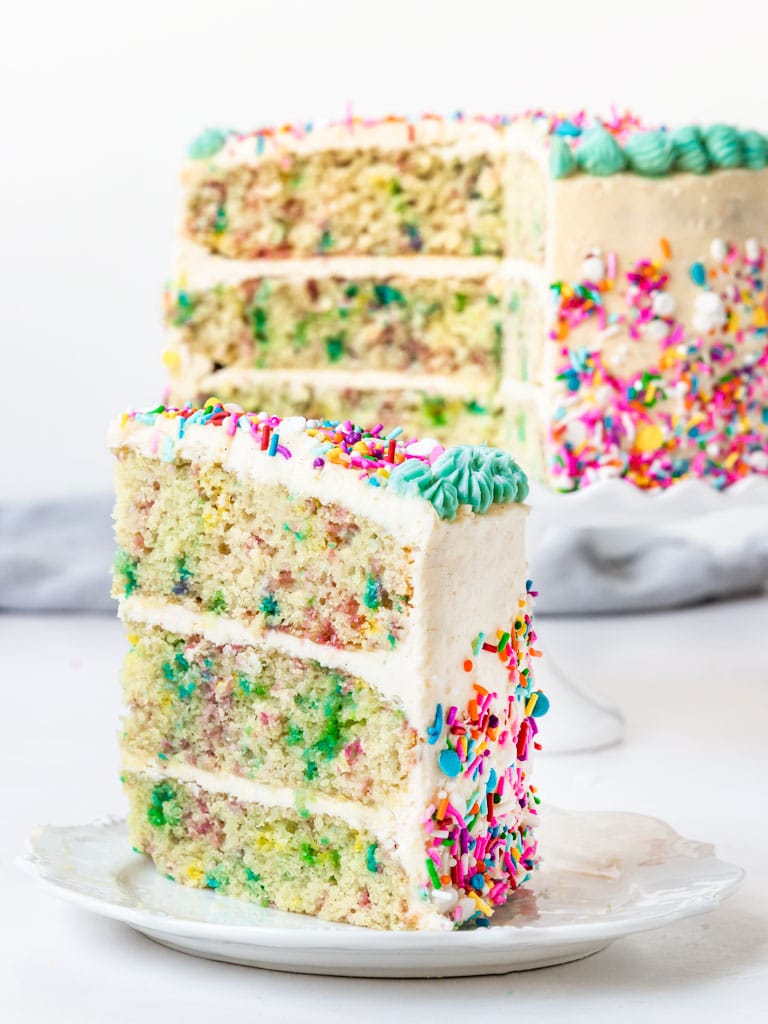 Ingredients (Full amount in recipe card at bottom of post):

If you've never had an eggless funfetti cake, it's really just a vanilla cake filled with tons of sprinkles! In fact, I based this entire cake recipe off my favorite Vegan Vanilla Berry Cupcakes and Vegan Funfetti Cookies!

This step is super important. Before making the vegan confetti cake batter, turn the oven on to preheat to 350F. At this point, you also want to prep the baking pans. To do this line the bottom of each baking pan with parchment paper and then lightly grease the sides of the pan so the cake doesn't stick. 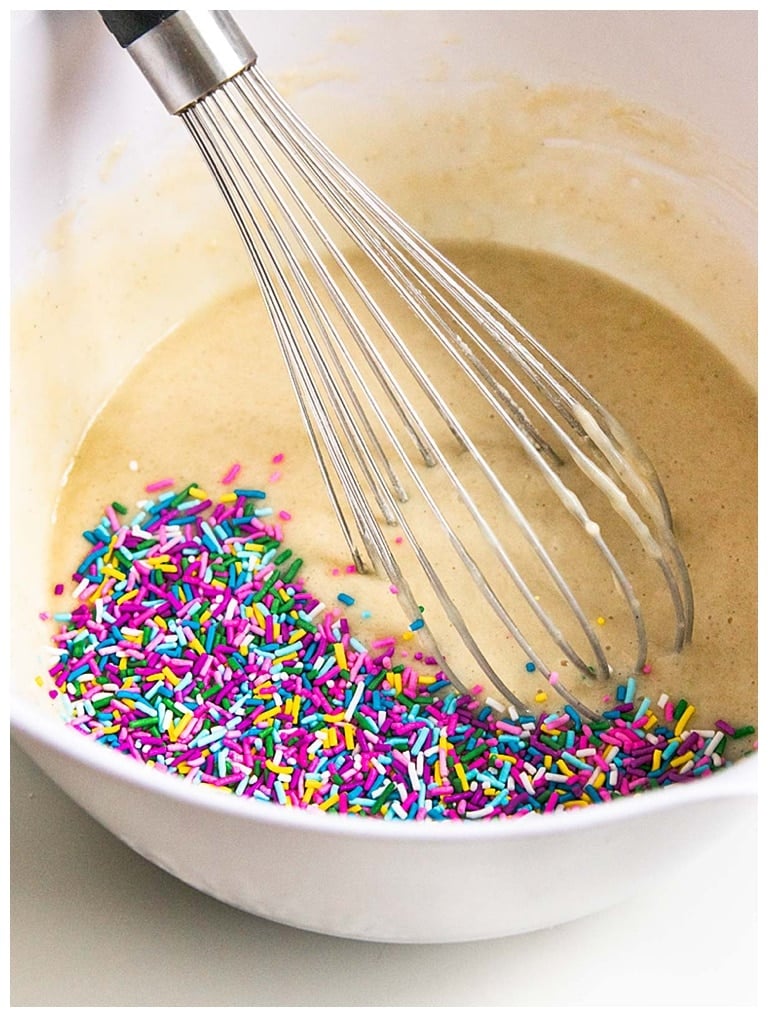 Then, make the funfetti cake batter:

Luckily, the easiest part of making this vegan birthday cake is making the batter. It can easily be made in one large mixing bowl and then poured in equal amounts into three separate baking pans. Plus, this recipe can easily be adapted to just make one-layer or two-layer cake.

First, mix all the wet ingredients together.  Then, add in the dry ingredients including the pastry flour, baking powder, and baking soda, and salt.

I like using pastry flour in this recipe as it leads to a light and fluffy cake. However, if you only have all-purpose on hand just replace 2 Tbsp of each cup of pastry flour with 1 Tbsp cornstarch.

The baking time for each vegan rainbow cake is 35-40 minutes. I love using a springform pan as it allows for much easier removal of the cakes after baking. If you only have a 9-inch pan that will also work, but the cake will be significantly thinner and will need only about 25-30 minutes baking time.

Once the cakes are out of the oven, I like to run a knife around the outside of the cake to loosen any cake that may be sticking to the pan. Then, remove the cakes and flip them upside down onto a cooling rack.

Once they are completely cool, frost them!

Pro Tip: I like to bake my cakes the day BEFORE frosting them. While I don't normally recommend refrigerating cakes or cupcakes, I make an exception with layer cakes as it makes them easier to frost. 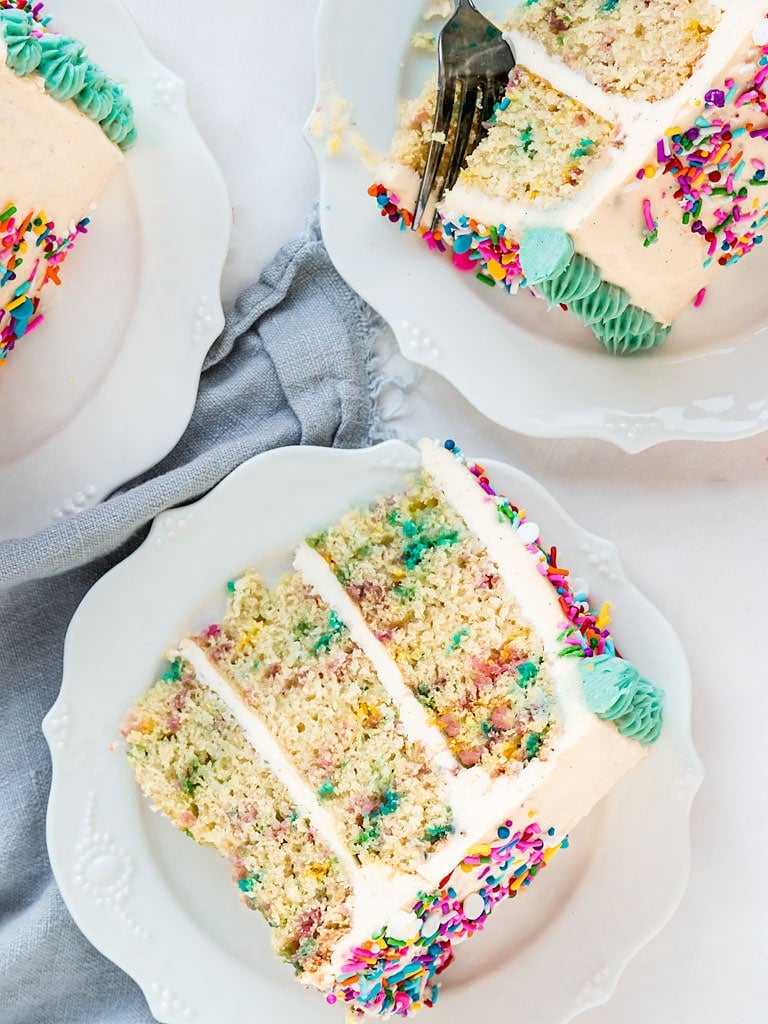 This vegan vanilla buttercream frosting is the base for many of my other vegan cake recipes like my Vegan Lemon Cupcakes It contains just four simple ingredients and taking less than 5 minutes to make.

How to assemble a layer cake

Now comes the fun part- frosting the vegan layer cake! I've put some process shots for you below, but the key is to make sure the cake and frosting are cold during each step. While I am going to break it down for you, I also recommend checking this guide on How to Frost a Layer Cake for even more step by step pictures.

Here is the basic cake decorating kit I have that contains a cake turntable, 2 Icing spatulas, an icing smoother, and some decorating tools. Unless you plan on decorating cakes often, a simple set like this is really all you need!

To make frosting the cake easier I used my icing spatula to spread out the frosting. After one layer is done, pile on the rest until you have three layers of cake and three layers of frosting! 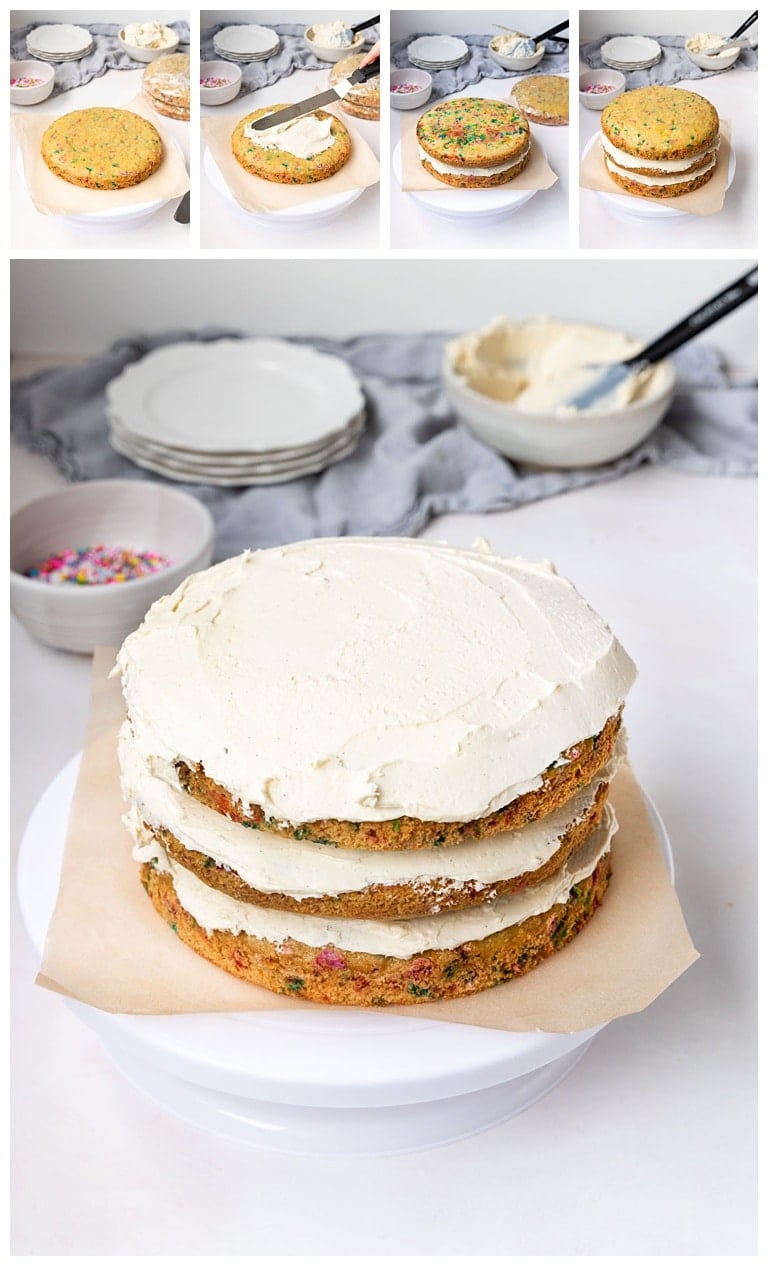 What is a crumb coat?

This layer doesn't have to be perfect and it's really about sealing in those cake crumbs.

Once the crumb coat has hardened to the touch, it's time for the final frosting layer!

Then, decorate with all the rainbow sprinkles!

I decided to go all out and pretty much covered the entire vegan birthday cake in sprinkles!  If you've wondered what vegan sprinkles are best for funfetti cakes, I recommend India Tree or Sweetapolita. This cake features the Sweetapolita Birthday party sprinkle medley.

For a final touch, set aside ¼ cup of frosting and color it with food coloring (I used 3 drops of blue food coloring). Use a piping bag and decorating tip to make a colorful border on the top of your vegan rainbow cake! 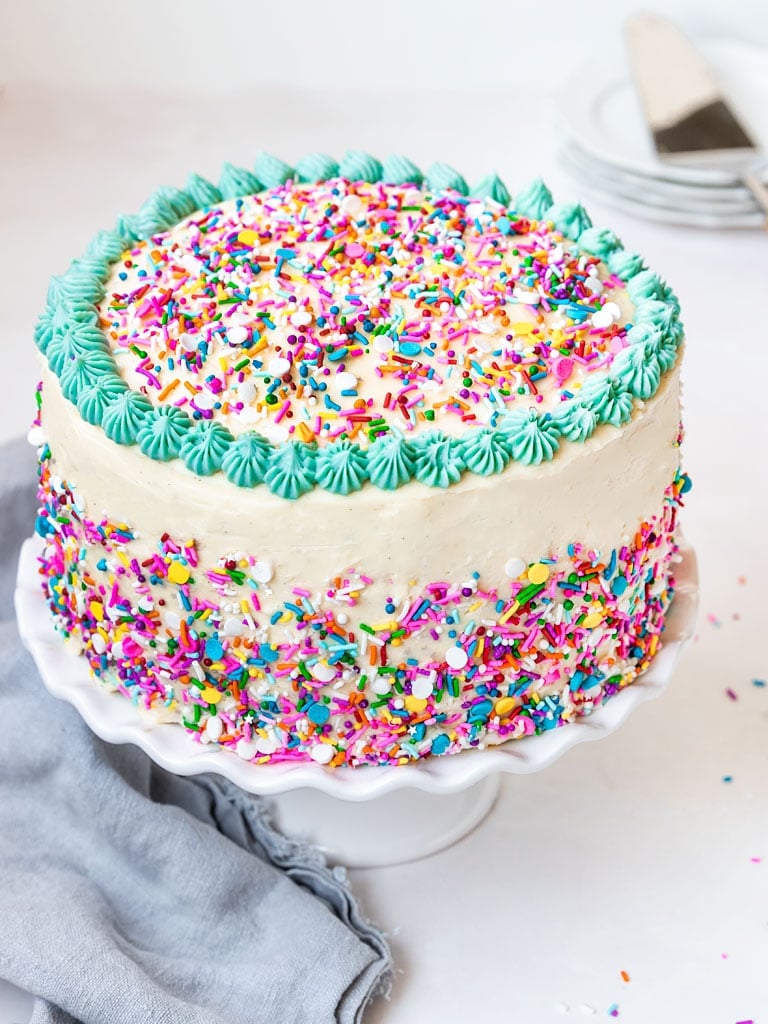 I may be biased but I truly believe this vegan & dairy-free funfetti cake is the perfect cake for any celebration. Honestly, it may even make another appearance at my 30th Birthday this year! I can't wait for you to try layer cake that is seriously so moist, light, & fluffy.

Cheers to two years of SGTO and many more sprinkle-filled years to come!