If you're looking for the perfect vanilla cupcake that happens to be vegan, then these easy Vegan Vanilla Berry Cupcakes are it! With berries ripe and in season, there is no reason not to deck out cupcakes with all the red, white, and blue.

At this point, I have tested my fair share of cupcakes. It all started with these Lemon Olive Oil Cupcakes. That also happens to be the recipe where I perfected my Vegan Frosting recipe.

Next, I made these decadent  Earl Grey Cupcakes with Blueberry Frosting. Since then I've even made Red Velvet Cupcakes and Cardamom Cupcakes with Rose Frosting. All of these cupcake recipes have led me to discover a few secrets to a moist and fluffy vegan cupcake every time.

#1: Always Use Pastry or Cake Flour

I use Bob's Red Mill Pastry Flour for all my cupcake recipes. Pastry flour is lower in protein than regular all-purpose flour, which ultimately leads to a more tender cupcake with a better crumb. It really is worth it to buy this flour!

The more you mix the batter, the more gluten will form. While you want lots and lots of gluten in recipes like my Vegan Matcha Black Sesame Sticky Buns, cupcakes need a light and airy batter that is not dense.

Also, over-mixing the batter will get rid of some of the air bubbles and lead to a flatter more dense cupcake. Basically, just mix the batter until all the streaks of flour are gone and not any longer.

#3: Don't Store Cupcakes in the Fridge!

This might be a more inconvenient tip, but I actually never recommend you store cupcakes in the fridge. Why? Because it completely dries out the cupcakes even after one day!

Instead, store unfrosted cupcakes in a closed container for up to 3 days at room temperature or freeze frosted cupcakes for up to 1 month. Just let the frozen cupcakes defrost on the counter for a few hours before frosting to enjoy!

Make sure to choose a good brand of cupcake liners so that your cupcakes don't get greasy. I prefer the non-colored all-natural ones in pretty much all of my recipes on the blog!

How to make vegan vanilla frosting

Once you have made perfectly fluffy and moist berry cupcakes, the next step in this recipe is to make a delicious vegan vanilla buttercream. This buttercream recipe is the base recipe that I use to make all the vegan frosting recipes on this site. It's so easy, super creamy, & contains five ingredients!

First, you'll want to cream together the butter and shortening until smooth. If you don't have shortening on hand, you can replace the shortening 1:1 with butter in this recipe.

Then, mix in the vanilla and coconut cream. I list coconut cream as optional because it leads to a lighter and fluffier frosting, but if you don't have it on hand this frosting still tastes delicious. Vanilla, however, is definitely not optional.

The last step is to gradually mix in the powdered sugar. I recommend using an electric mixer for all my frosting recipes to get out any lumps in the sugar.

After that, use a piping bag and your favorite piping tip to frost the vegan vanilla cupcakes!

These Vegan Vanilla Cupcakes with fresh berries are sure to be a hit at all your summer gatherings and are great to make as a vegan July 4th dessert!

Even if you don't celebrate the 4th- I still hope you find a good excuse to make these vanilla cupcakes this summer! Enjoy :).

Loved this recipe? Then don't forget to leave a 5-star 🌟rating in the recipe card below and a review. I always appreciate your feedback! Stay in touch with me on Instagram, Facebook, Tiktok, and  Pinterest, or sign up for our newsletter so you never miss another recipe! 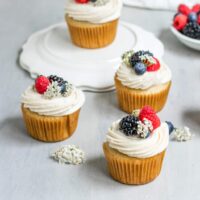