Let me clue you in on a little secret- rhubarb is the ingredient you have been looking for to use in all your spring and summer desserts! This rhubarb bar recipe includes layers of delicious buttery shortbread topped with smooth and creamy rhubarb curd. Bake it all together and slice into the perfect tasty squares. All that’s needed is a dusting of powdered sugar on top to make these Vegan Rhubarb Bars the most delicious vegan dessert of summer! 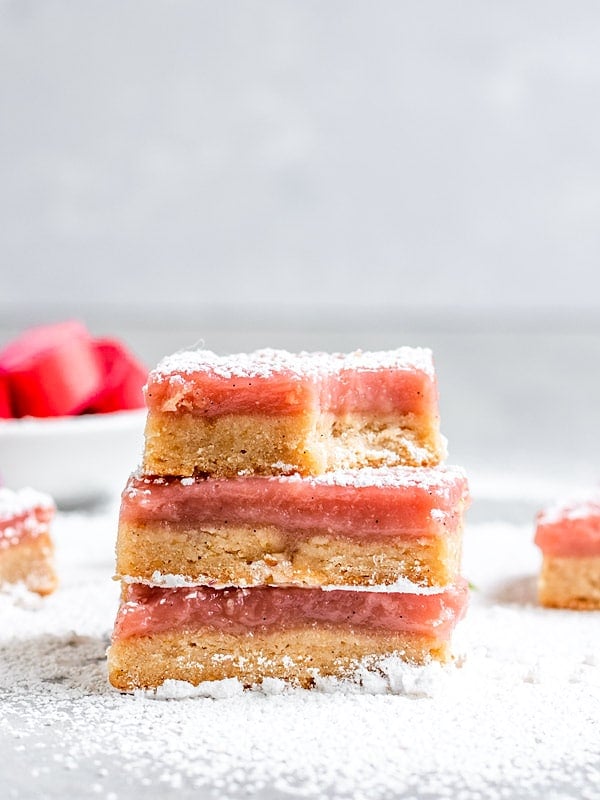 The bottom layer of these rhubarb squares is based on the dough I used to make my incredibly popular 7 Ingredient Funfetti Cookies.

All you need is vegan butter, organic sugar, vanilla, all-purpose flour, ground flaxseed, baking powder, a little nut milk, and some salt. Once the dough has formed, simply press the dough into an 8*8 baking tray lined with parchment paper and cook for 20 minutes before adding the next layer! 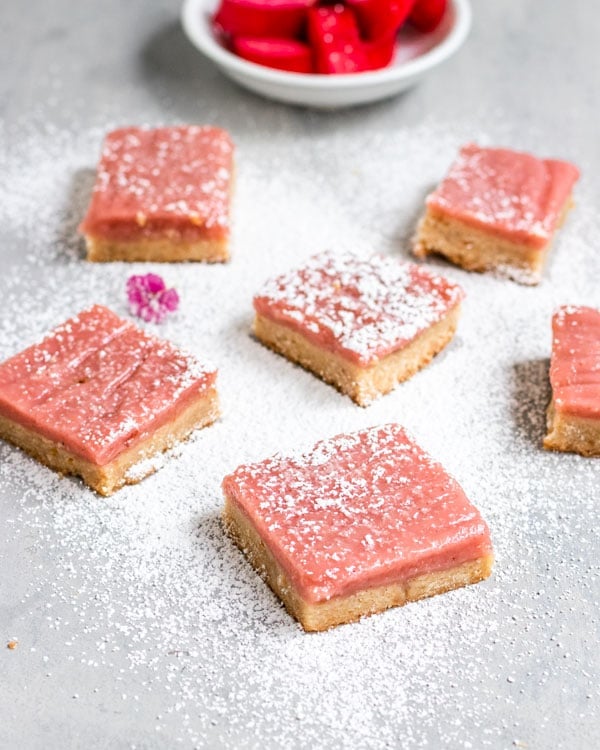 How to Make Vegan Rhubarb Curd:

A few months ago, I made Vegan Lemon Curd which serves as the basis for the rhubarb curd layer. For this recipe, I adjusted the ratios a little due to the cooking time added from baking the curd in the oven.

There’s no vegan butter in this curd and it is made from four simple ingredients- rhubarb, organic sugar, arrowroot powder, and coconut cream. Make sure to use coconut cream that has no additional additives, water, or oils in it for this recipe to work well.

First, I like to cook my rhubarb and sugar in a small saucepan until softened. Then, I add the softened rhubarb and coconut cream to a blender to create a smooth puree. Next, I add the rhubarb puree back to the saucepan and whisk in the arrowroot.  Finally, heat until the curd is nice and thick and set aside before baking!

Fun fact- Rhubarb is actually a vegetable! It has stalks similar to celery that range in color from red to green that you can eat.

In Seattle, rhubarb is usually in season between May- July. However, rhubarb actually freezes well so you can make these rhubarb bars all year long!  Rhubarb tastes pretty tart and tastes best mixed with other sweet fruits as I did in these Frozen Strawberry Rhubarb Margaritas, or with sugar, as I did in this recipe!  Beware, the leaves are toxic so stick to eating the stalks for any rhubarb recipe. 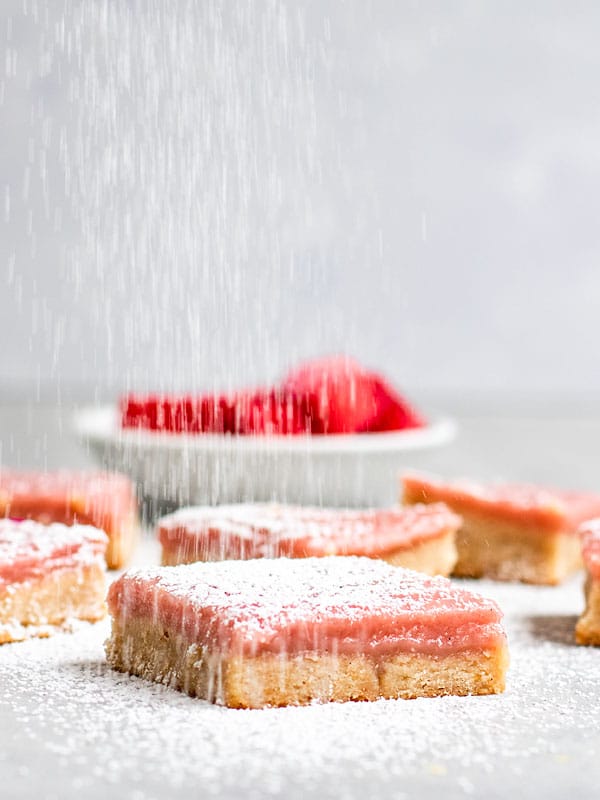 Once your rhubarb shortbread bars have been layered and baked, let them cool at room temperature. It’s really important to do this before adding them to the fridge so they don’t get soggy.  After the bars are cooled, cover and add the vegan rhubarb bars to the fridge for at least 1-2 hours to set. This allows the rhubarb curd to set to a firm texture and makes it so you can easily cut the rhubarb bars into perfect squares.

Being able to refrigerate these vegan rhubarb bars actually makes them super easy to make ahead of time and store in the fridge for guests. As a final step, use a dusting wand or small sifter to dust powdered sugar on top right before serving! 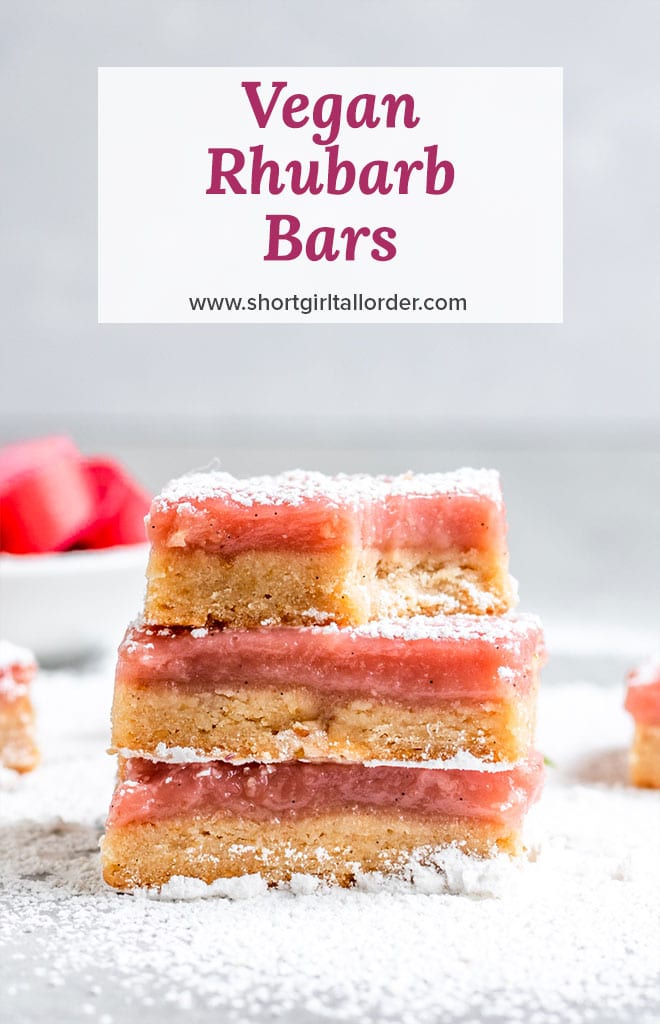 Hopefully, this recipe has convinced you that team rhubarb is the place to be!  I am a firm believer that there is never too much of a really good thing in life- especially when it comes to vegan rhubarb desserts. In this case, I recommend eating these Vegan Rhubarb Bars by the handful!

Looking for other vegan dessert recipes on SGTO? Check out these favorites!

These Vegan Rhubarb Bars start with a layer of vegan shortbread cookie topped with a layer of creamy vegan rhubarb curd. A dusting of powdered sugar on top makes these the perfect rhubarb dessert!

Then, make the rhubarb curd

Finally, bake it all together

*Rhubarb Bars can be kept in the fridge for up to 3 days in a closed container. Layer the bars between stacks of parchment paper or they will stick together and become soggy. Do not store the bars outside of the fridge.

*Rhubarb Bars can be stored in the freezer up to 2 months. Simply remove from the freezer and defrost on the counter before eating.

I Love Food! More specifically, I love cooking plant-based. If you've come here looking for plant-based weeknight dinner recipes or decadent vegan desserts- you are in the right place! Eating plants doesn't have to be hard and it certainly shouldn't be boring. I am here to help you on your journey to eat food you actually feel good about and to make cooking at home fun again! ABOUT

Load up on plant based eats & more!

Any cookies that may not be particularly necessary for the website to function and is used specifically to collect user personal data via analytics, ads, other embedded contents are termed as non-necessary cookies. It is mandatory to procure user consent prior to running these cookies on your website.