If there's anything I love more than Fall & pumpkin picking, it's all the glorious baking you can do with the produce in season this time of year. Growing up, I only ever ate cinnamon rolls if they were from a Pillsbury can, so learning to make my own at home has been a real treat.

Maybe I'm alone in this thinking, but what I love about cinnamon rolls is the time &  labor it takes to make them. I've tried making buns where I only let the second rise last 1 hour vs. overnight and, while they were good, this extra time makes them GREAT.

It's kind of like those recipes that tell you to chill cookie dough for 24 hours. We all hate the wait, but know it is SO worth it! Plus, then you can feel like a kitchen queen (or king) when you wake up in the morning, preheat the oven, pop those buns in the oven, and have a morning feast!

These pumpkin sweet rolls are just a bit extra because, in addition to putting pumpkin puree into the bun dough, I also mixed it into the cinnamon sugar filling. This truly made these buns taste like a pumpkin pie inside a vegan cinnamon roll! Then, I went one step further and added pumpkin pie spice to the glaze to give it that perfect cinnamon & nutmeg-filled kick.

Just beware- the filling in these vegan pumpkin rolls has a tendency to leak out if you're not super careful when rolling them up. Make sure to continually tuck the filling in as you go!

I seriously couldn't bake as much as I do without my KitchenAid Standing Mixer. It's a rather big investment, but it is worth every penny. Plus, the dough hook works wonders when I'm too lazy to knead my own dough!

For baking, I use this super basic USA Bakeware 10" Pan. These buns can also be baked in a skillet or sheet pan, just make sure all the buns are pressed closely together pre-bake or you might overcook them.

Basically, these easy Vegan Pumpkin Pie Cinnamon Rolls are the best of Fall through and through. Once you're done baking these, check out the other sweet rolls & cinnamon roll recipes I have on the blog, or continue your pumpkin kick by making my favorite soft Vegan Pumpkin cookies. Enjoy! 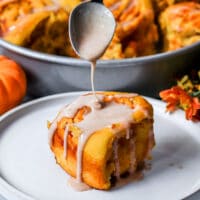