Are You Ready For Your New Favorite vegan cupcake recipe? Baking these cupcakes with earl grey and bergamot pairs perfectly with this rich blueberry lemon frosting. So let’s jump right to it so I can tell you how to bake these fluffy Vegan Earl Grey Cupcakes with Blueberry Lemon Frosting! 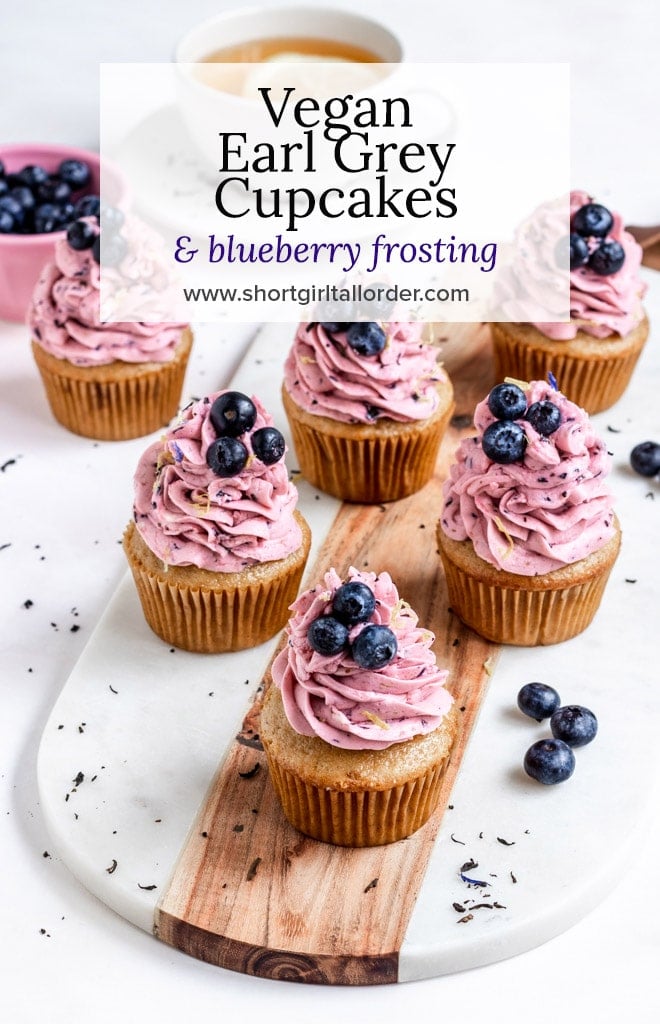 How to make earl grey cupcakes

The main inspiration behind these cupcakes came from a desire to start baking with Earl Grey. The first recipe that really inspired me to do this was these amazing Brown Butter Earl Grey Chocolate Chip  Cookie Bars from my friend Joanne at Olive & Mango. I love how Earl Grey can compliment so many different flavors from bold chocolates to tart lemons. I knew I just had to make earl grey the star of my next cupcake recipe…with the help of some vanilla of course! 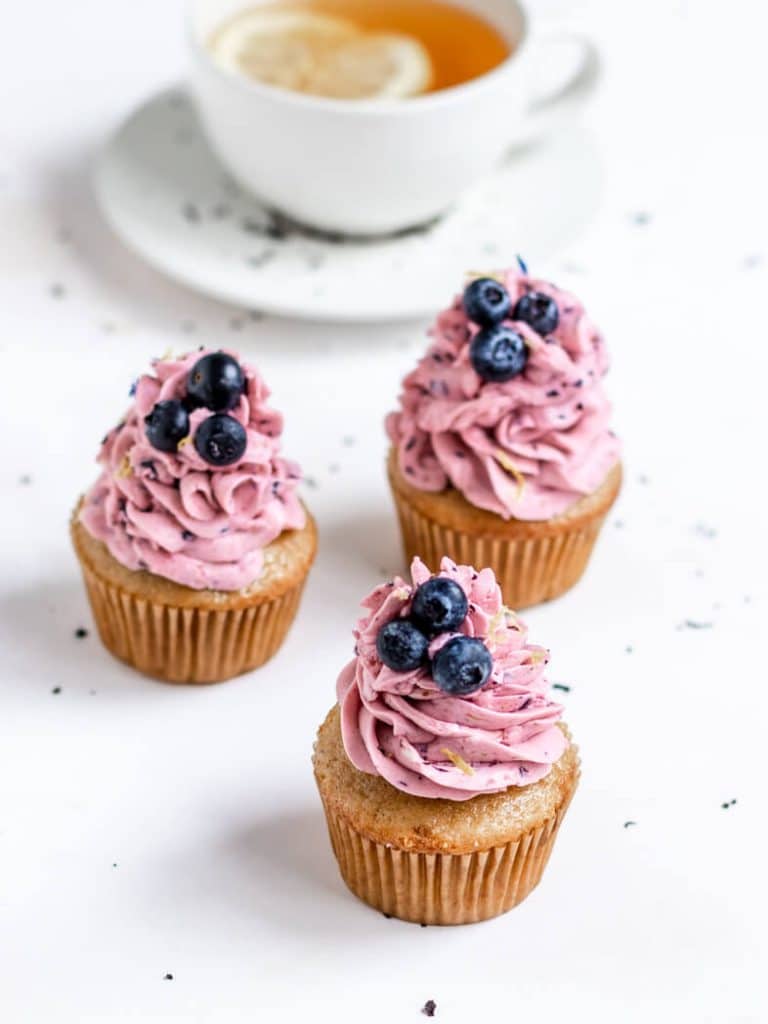 After making the cupcakes, the next step was figuring out what flavor frosting to mix with Earl Grey.

Earl Grey is traditionally made with bergamot which gives it a citrus taste.  I had a lot of flavor ideas, but ultimately polled all of you following on Instagram and the overwhelming opinion was to go with blueberry! So you know that’s just what I did. 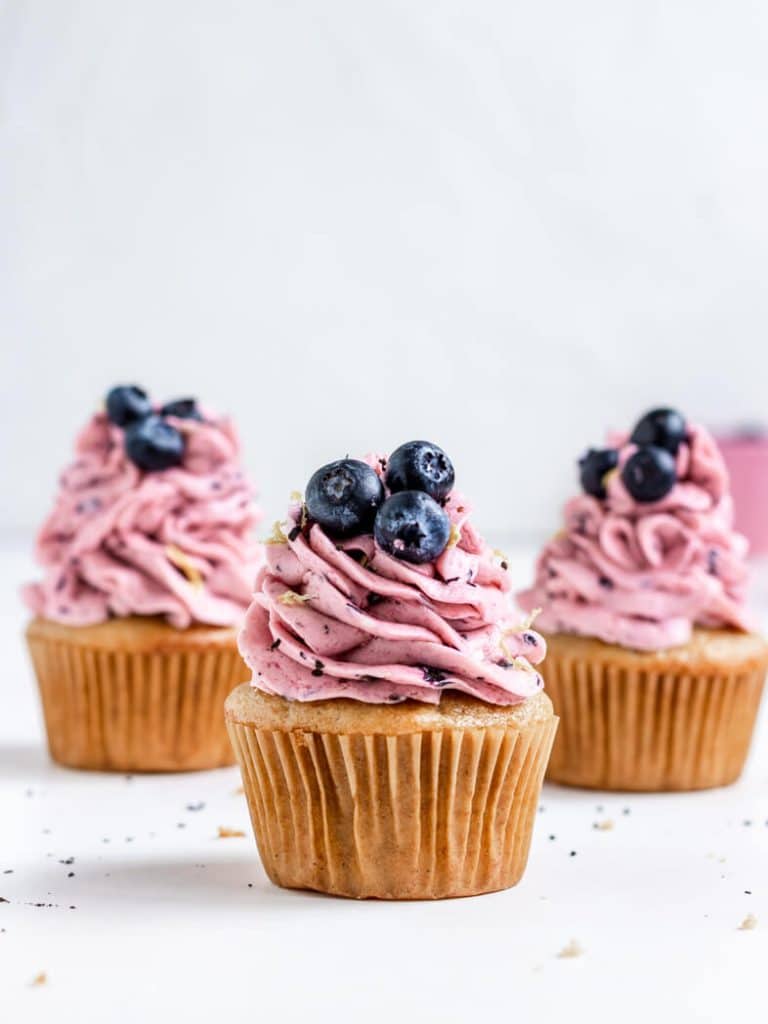 How to make vegan blueberry frosting

One question I get a lot when I make any cake or cupcakes recipe is “How do you make such a fluffy and smooth vegan frosting?!” Since I want to share the secret with you all, here’s the formula I follow for pretty much every vegan frosting recipe on my site:

Depending on your preference Miyokos or Earth Balance works best. The trick is to cut the butter into chunks and whip it while it is still cold with your vegan shortening.

I really love Spectrum Organics as its sustainably sourced palm oil. The reason I like to mix shortening with vegan butter is that palm oil tends to be softer at room temperature and makes the frosting really creamy and easy to pipe. 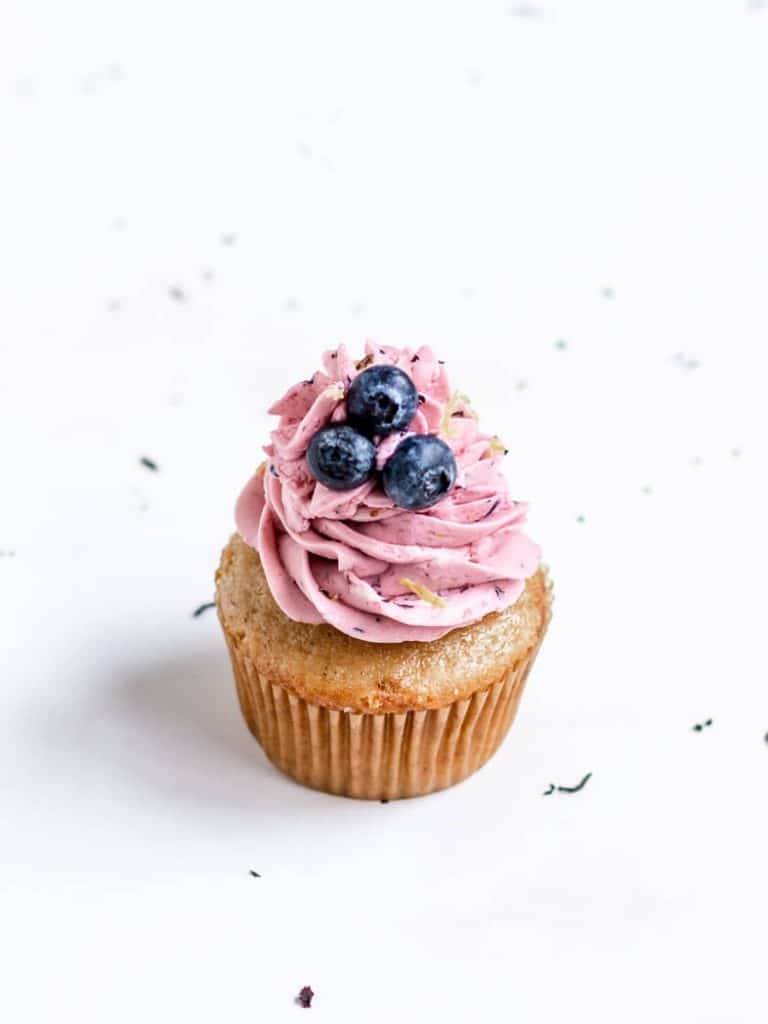 Adding just 1 Tbsp of this makes the frosting so much fluffier.

Powdered Sugar definitely is the key to getting a sweet frosting that is still super smooth. Make sure it’s organic or it’s likely not vegan!

Five: Add in Some Flavor!

This is where I like to get creative. For my Vegan Lemon Olive Oil Cupcakes, I stuck to just vanilla bean paste. For my Vegan Blood Orange Olive Oil Cake, I added in some fresh blood orange juice. Then came my Vegan Cardamon Cupcakes with a rose-flavored frosting!

For these earl grey cupcakes, I added in fresh blueberries & a bit of lemon zest to compliment the bergamot flavor. Other flavor suggestions could be fresh strawberries, fresh orange juice, mint, peanut butter, or even melted chocolate! 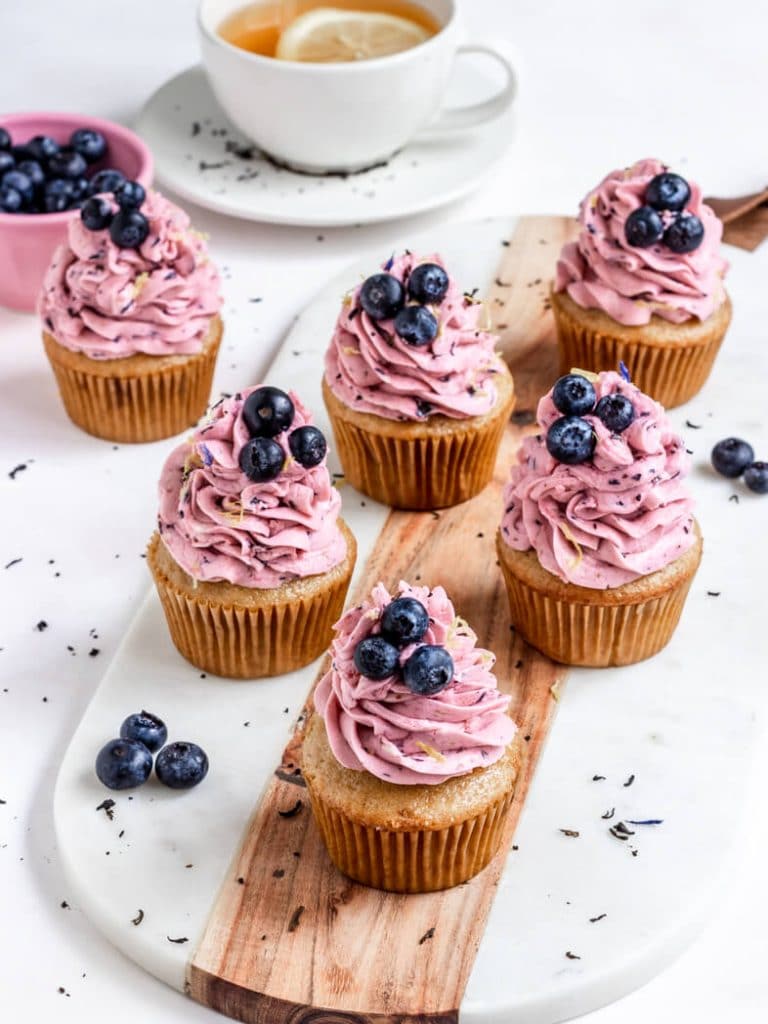 These Vegan Earl Grey Cupcakes with Blueberry Lemon Frosting are truly the perfect cupcakes to WOW guests at any event.  If you have more cupcake recipes you want to see, please comment below any time so I can create more of the recipes you want to bake at home. In the meantime, enjoy these absolutely delicious earl grey cupcakes!

Cupcakes are best enjoyed in 2-3 days, but they will store in the freezer up to 1 month. I don’t recommend storing in the fridge as this will dry them out.

It’s also best to make the frosting the day you want to eat the cupcakes, but cupcakes can be stored in the freezer frosted as well. Simply let them defrost to room temperature on the day you are ready to eat them

Questions or reviews for this recipe? Leave them here! Cancel reply

I Love Food! More specifically, I love cooking plant-based. If you've come here looking for plant-based weeknight dinner recipes or decadent vegan desserts- you are in the right place! Eating plants doesn't have to be hard and it certainly shouldn't be boring. I am here to help you on your journey to eat food you actually feel good about and to make cooking at home fun again! ABOUT

Load up on Plant-Based Eats & More

Any cookies that may not be particularly necessary for the website to function and is used specifically to collect user personal data via analytics, ads, other embedded contents are termed as non-necessary cookies. It is mandatory to procure user consent prior to running these cookies on your website.