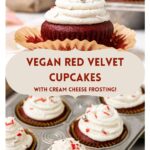 What is a traditional red velvet cake?

Fun fact, but the original red velvet cakes developed years ago were actually more dark red/maroon in color and the color was all due to food science!

Essentially, traditional red velvet cake was made with buttermilk, which is fermented milk that produces lactic acid.  It was then mixed with vinegar and cocoa powder. The mixing of buttermilk and vinegar causes a chemical reaction that brings out the anthocyanin in cocoa powder to produce a red color!

Since these cupcakes are vegan, we are using red food coloring, but beet powder is another option to give these vegan red velvet cakes that traditional color.

This eggless & dairy-free red velvet cupcake recipe is actually super easy, contains only 11 ingredients, and it can be made in ONE BOWL!

This is done by mixing plant-based milk and apple cider vinegar together and let sit for 5-10 minutes until the milk starts to curdle. If you don't have apple cider vinegar, it can also be replaced 1:1 for lemon juice in this recipe!

Next, add the wet ingredients including the oil, sugar, and vanilla extract, and whisk to combine.

Then, use a flour sifter to add in the dry ingredients including the pastry flour, cocoa powder, baking powder, and baking soda.

I HIGHLY recommend sifting any recipe that calls for cocoa powder or else you may end up with chunks of chocolate in your cupcakes. Believe me, sifting it is worth it!

I add between 12-16 drops of red food coloring to make my cupcakes bright red in color. Remember, the cupcakes will dull down quite a bit during baking so make the batter redder than you would actually want!

Spoon the eggless red velvet cupcake batter into each cupcake tin until it is about ¾ cup full. Do not fill the muffin tins all the way or your cupcakes will explode over the tops of the liner and they will be harder to frost.

Then, bake the red velvet cupcakes for 22-24 minutes until a toothpick comes out clean but the cupcakes are still moist in the center!

While the baked red velvet cupcakes are cooling, it's time to make the best 4-ingredient vegan cream cheese frosting!

I like to start by whipping the butter solo. I do this to make sure to get rid of ALL the chunks in the butter. Once that's done, I add in the vegan cream cheese & vanilla and whip until smooth. Then, I'll turn down the speed of my mixer and gradually add in the powdered sugar ⅓ cup at a time.

I will say, this frosting gets pretty soft after being whipped, so I like to add it to my piping bag and then place my piping bag full of frosting in the fridge to firm up. This helps the frosting firm up so you can pipe those perfect swirls onto your vegan red velvet cakes!

Cream cheese frosting can last up to 1 week stored in the fridge in a closed container. Simply scoop it out and add it to a piping bag when you are ready to frost your cupcakes or cake!

How do I store red velvet cupcakes?

Cupcakes are best stored at room temperature for 1-2 days (unfrosted and wrapped in plastic wrap or in a closed container) OR if frosted, in the freezer. As a food blogger, my freezer is 90% frosted cupcakes or cakes, so I can truly recommend this method.

I like to store my cupcakes in a tall closed container (so I don't smush the frosting) in the freezer for up to 1 month. When I'm craving a cupcake, I just remove them from the freezer about 1 hour prior to serving it to defrost.

Traditional red velvet cupcakes are made red from the chemical reaction between buttermilk (which is acidic) and cocoa powder.

However, since we are making these cupcakes vegan, I used natural food coloring from Supernatural to color the cupcakes. Make sure to double-check the red food coloring you use, as not every brand is vegan.

Also, I do want to note the red food coloring is just for appearance, so if you don't want to use any food coloring, it won't affect the taste of these cupcakes!

These Vegan Red Velvet Cupcakes have the perfect hint of cocoa, a moist and delicious crumb, and are paired with vegan cream cheese frosting for the perfect treat. Enjoy! 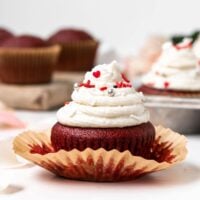