It's finally Summer which means it's time to start eating copious amounts of fruit and lots of this Healthy, Gluten-Free, & Vegan Blueberry Nectarine Crisp! As much as I like eating fruit fresh, I still find myself looking for fun ways to bake fruit into fun treats this time of year. If you're like me and looking for a good excuse to bake some fruit but still keep it relatively healthy, then this crisp is the perfect treat for you! 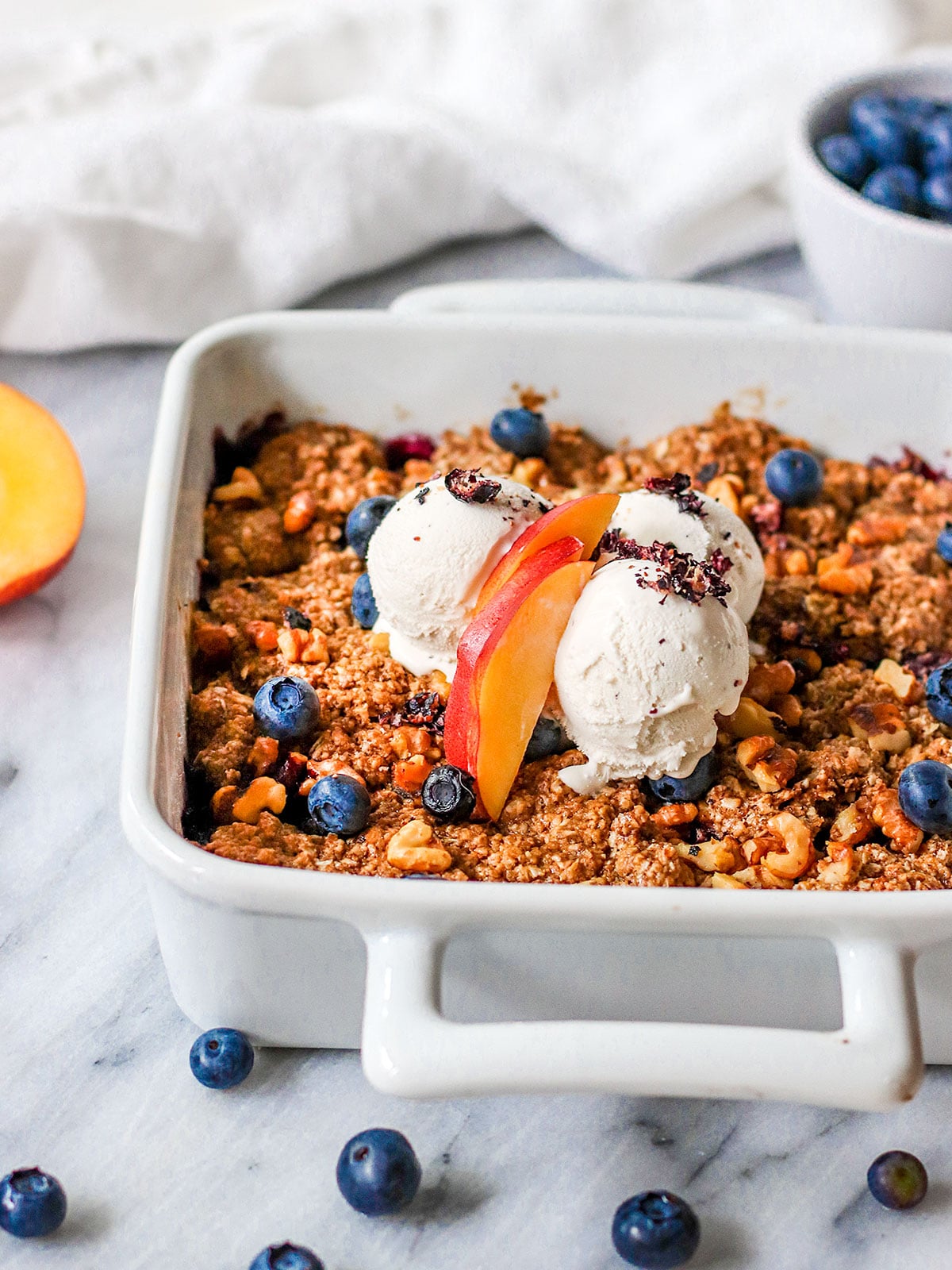 How to make a healthy nectarine blueberry crisp

The reason I decided to make this into a healthier crisp was mainly that I was looking for an interesting way to change up my breakfast. I pretty much alternate between eating yogurt with my homemade maple almond butter granola, avocado toast or my green breakfast smoothie. Now, don't get me wrong, both of these are great, but lately I've been craving something sweeter!

So I thought "How can I make an interesting and seasonal breakfast that won't weigh me down and will actually make me full? Out came this perfect vegan crisp with stone fruit and berries! 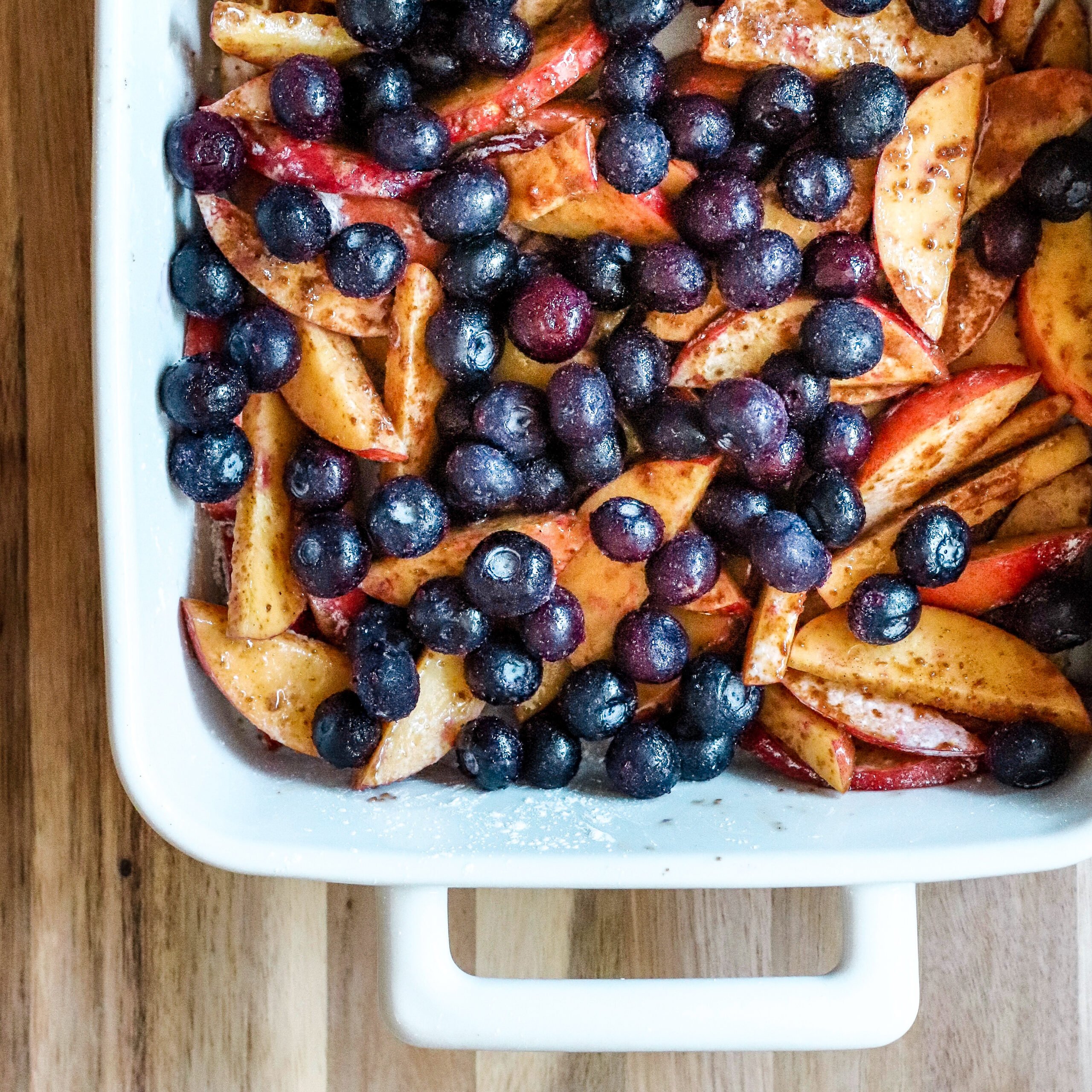 Can I sub in another sugar?

The Secret Ingredient to Any Great Crisp: Cornstarch!

The most essential ingredient in this crisp is actually cornstarch!

This acts as a thickener that makes the fruit in the crisp really jammy and delicious. If you don't have this on hand, use double the amount of tapioca starch or use an equal amount of arrowroot powder can be used as a substitute. I have tried this recipe with arrowroot starch and it works just as well- but personally have not tried it with tapioca starch yet. 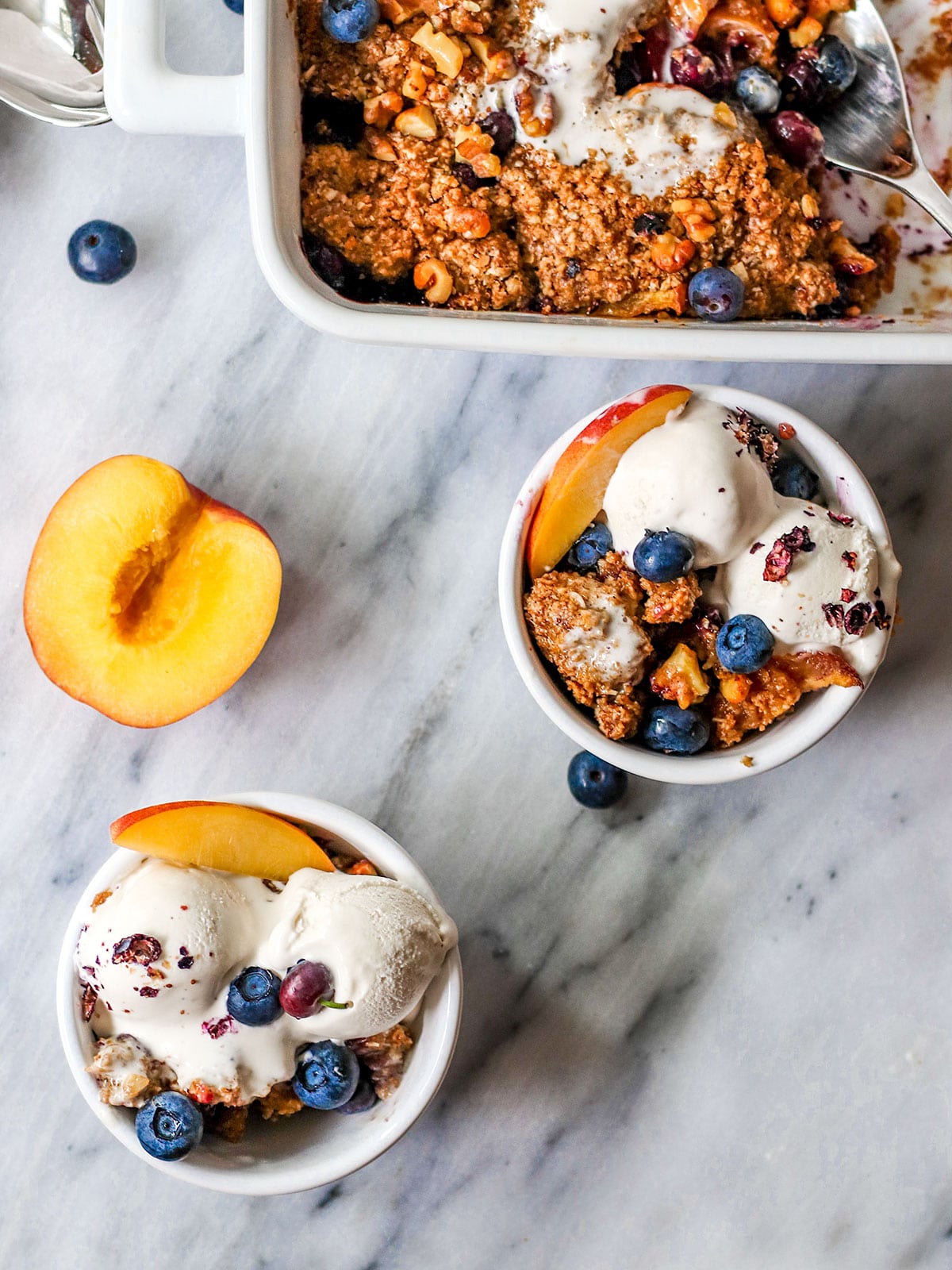 Once you have your ingredients, making this easy nectarine blueberry crisp only takes three simple steps.

Add the nectarines and blueberries to an 8*8 baking pan and coat with the cornstarch, coconut sugar, lemon juice, and cinnamon. Set aside.

Make the crisp topping in a blender

Then, add all the crisp topping ingredients to a blender. Pulse until a thick mixture forms. It should be sticking together and semi-crumbly, so if it is too dry, add in 1 Tbsp of almond milk or water to make the topping more cohesive.

Add the crisp topping to the baking pan full of fruit and then top with pecans. Add to the oven and bake for 45-50 minutes until the crisp is bubbling on the sides and the topping is browned on top. 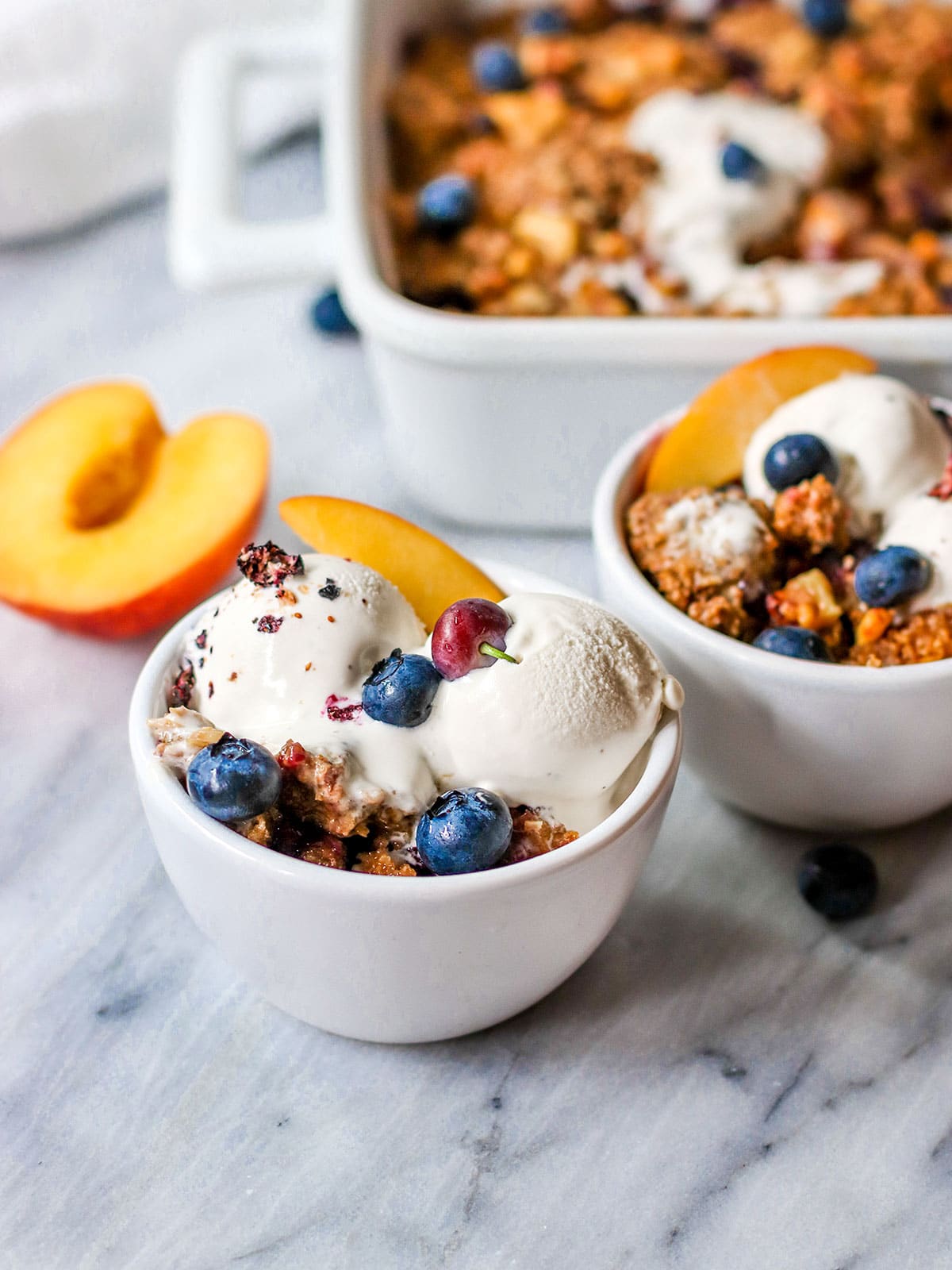 While I used blueberries and nectarines for this vegan crisp recipe, there are tons of fruit substitutions that work! Instead of blueberries, try raspberries, cranberries, or blackberries. Instead of nectarines, try peaches, pears, or apricots!

In addition to fruit substitutes, the coconut oil in this recipe can be replaced 1:1 with any vegan butter. I recommend using cold vegan butter to create the best crisp texture!

As mentioned above, while cornstarch is a really important ingredient for this recipe, it can also be replaced 1:1 for arrowroot powder.

If you don't have almond flour on hand, simply replace 1:1 for ¼ cup of more oats. I like the variety of flavors the oats and almond give this crisp, but just using oats tastes just as good.

Last, but not least, if you want to add in some extra flavor I highly recommend topping this healthy nectarine crisp with delicious vegan vanilla ice cream!

This Healthier Vegan Nectarine Blueberry Crisp is my version of an ideal crisp- gooey on the inside, crisp and crunchy on top.

At the end of the day, never be afraid to experiment, adjust things, and of course to tell me about it so I can try it too. I seriously love hearing from all of you whenever you try a recipe of mine, so I hope to hear all about your crisp baking adventures!