It's about time I brought you a PEAR-fect dessert recipe that just happens to be VEGAN, GLUTEN-FREE, OIL-FREE, & REFINED-SUGAR FREE! These healthier Baked Maple Cinnamon Stuffed Pears feature beautiful seasonal bosc pears and can be made with ONLY 8 INGREDIENTS for the most delicious pear dessert recipe! 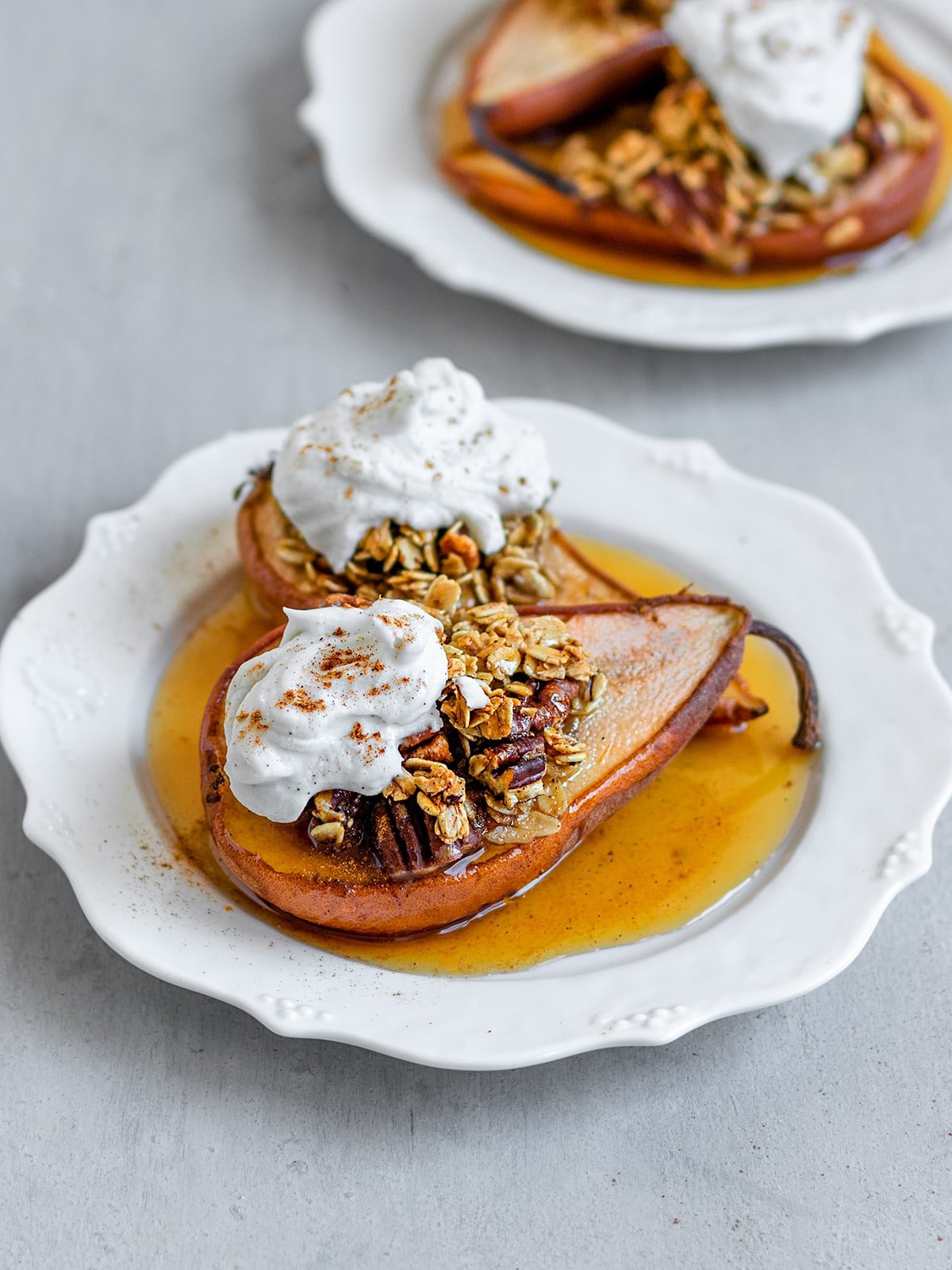 I like to think of these pears as a parfait...but ten times better. Like a parfait, these maple stuffed pears have multiple layers of flavor that keep getting better.

This recipe only calls for 8 ingredients making it super simple to make!

On the bottom is the pear that gets baked until it is soft and easily pierceable with a knife. Then comes the Maple Cinnamon Granola. This is a mixture of gluten-free oats, cinnamon, maple syrup, salt, and vanilla. After that, you'll definitely want to top the pears with some high-quality maple syrup.

While these pears take 40-50 minutes to bake, they're super easy to assemble and the prep time takes only 5-10 minutes.

As a final touch, I recommend topping these pears with some decadent vegan coconut whipped cream. I always follow Minimalist Baker's tried and true recipe for coconut whipped cream. You can add a little maple syrup in place of powdered sugar to keep this refined-sugar free, though it won't be quite as thick. 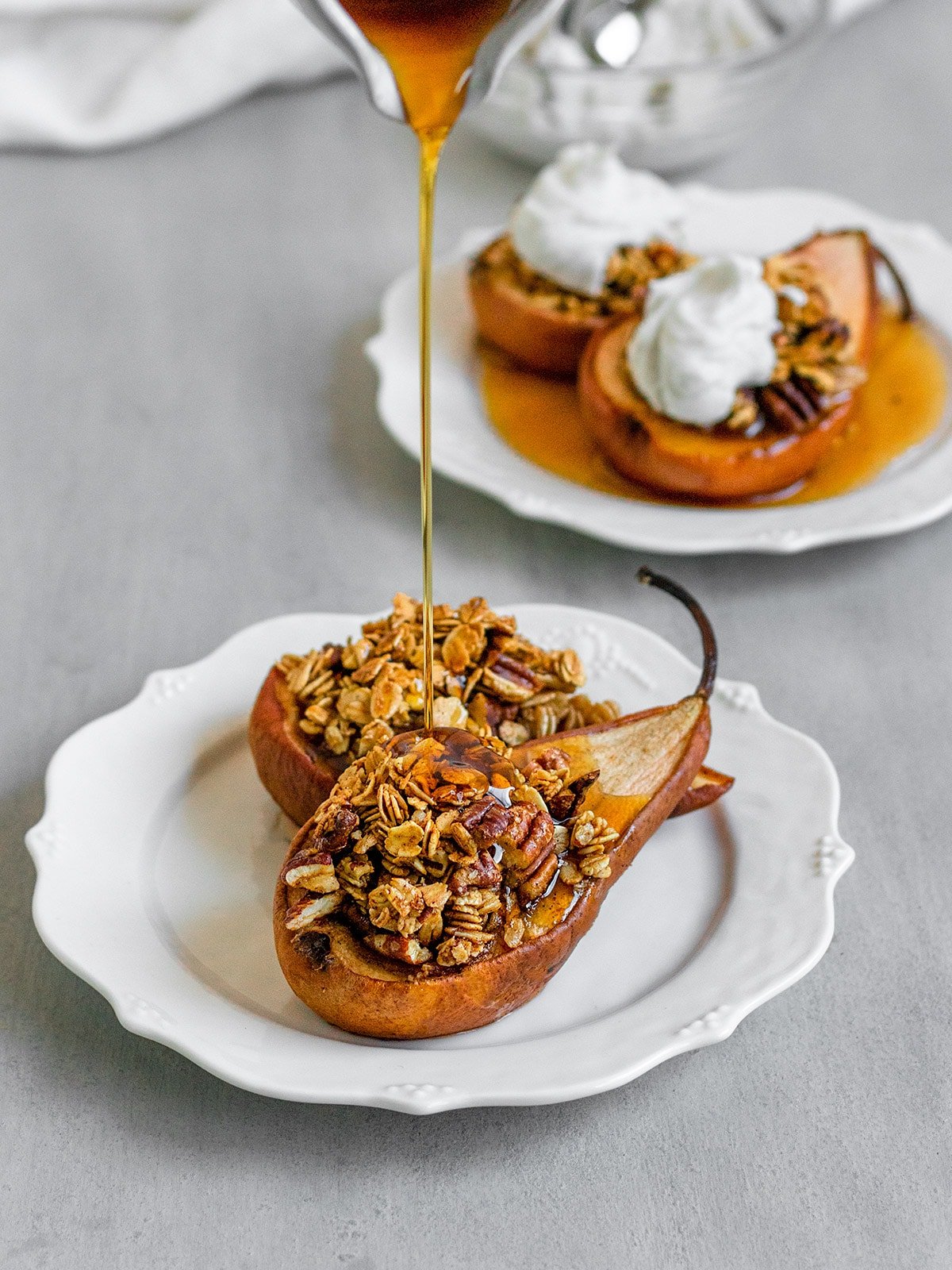 What are the best pears to bake with?

For reference, if you are making a sauce or say a Vegan Pear Pizza, you'll want to use pears that fall apart and lose their crisp texture while baking such as bartlett pears. Those are the pear varieties you want to avoid in this recipe.

Is there a substitute for maple syrup?

I haven't tried it, but I find the maple syrup is really necessary to coat the oats and spices so they mix well together and crisp up while baking. You could try using a date syrup or honey if you are not vegan!

How do I store leftovers?

While you can store these maple baked pears as leftovers, they honestly are best the day of when they are warm and right out of the oven. However, pears will keep in a closed container in the fridge for 1-2 days if needed. If you are storing in the fridge, remove the whipped cream or do not put it on top as it will make the pears and granola soggy if left to sit too long. 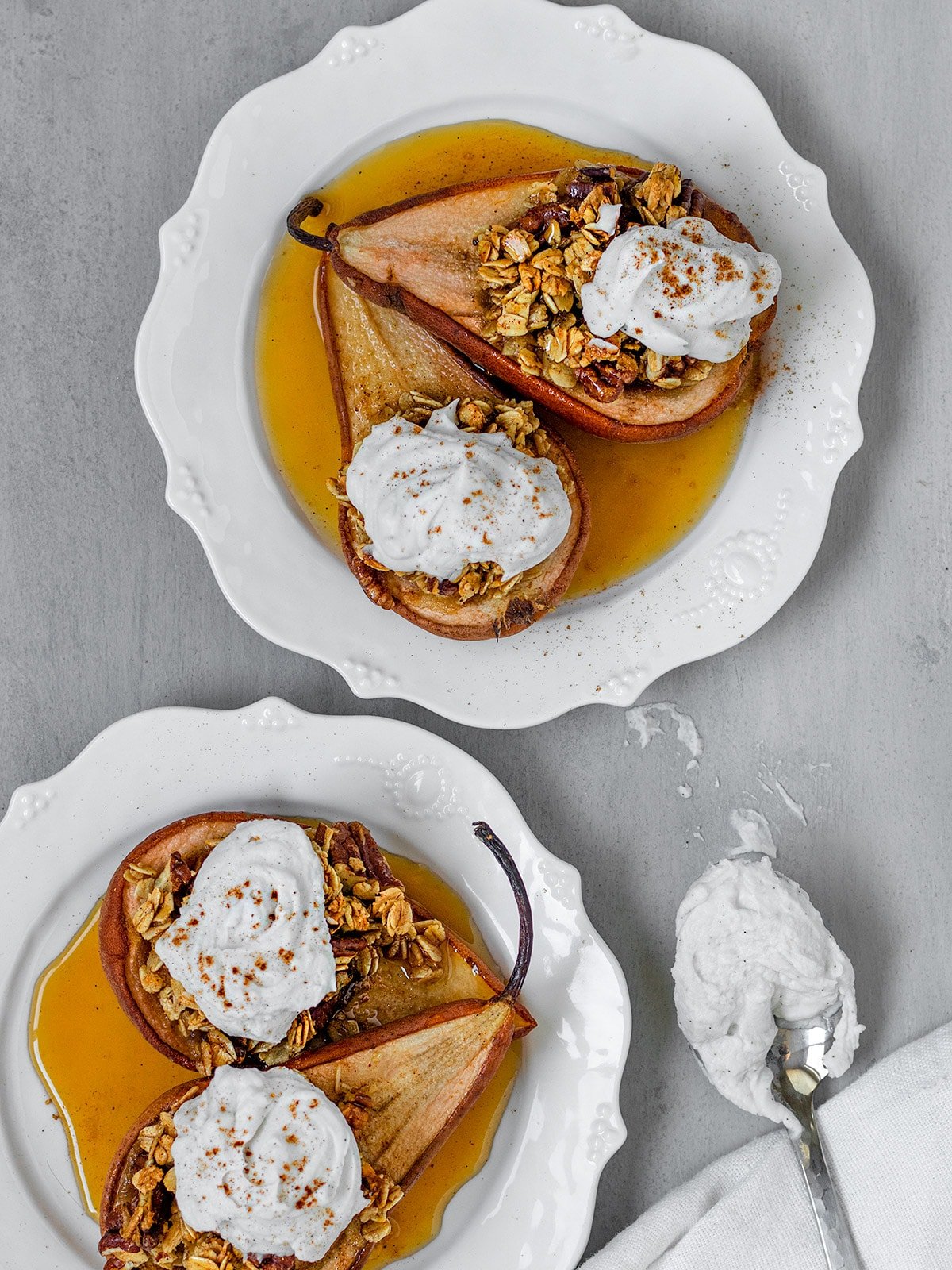 Between these Vegan & Gluten-Free Baked Maple Cinnamon Stuffed Pears & my recent Vegan Blood Orange Olive Oil Cake, I am setting you all up to enjoy some good months of baking ahead. Let's be honest, come May I know all you will want to do is make fresh salads, pretty popsicles, and fruit-filled cocktails. Until then, I'm going to keep the baking party going for all of us.

*Pears will keep in a closed container in the fridge for 1-2 days, but are best enjoyed day of. If you are storing in the fridge, remove the whipped cream or do not put it on top as it will make the pears soggy faster.