These fluffy Baked Vegan Apple Cider Donuts are coated in cinnamon sugar to taste even BETTER than their fried doughnut counterparts! If you've never tried making homemade baked donuts before, these cinnamon sugar donuts are a must-make!

I don't know about you all, but I LOVE vegan baked donuts in the Fall. More specifically, I love cinnamon sugar-coated, apple cider-filled, fluffy, baked donuts! These vegan cake donuts are very similar to my vegan cupcake recipes but in the shape of a doughnut which makes them 1000 better.

The flavor of these donuts literally transports me back to childhood and to those last sunny, yet chilly, days spent apple picking at Beak & Skiff Farms. There is truly no better way to spend a crisp Fall day than picking apples in Upstate NY!

While the full ingredient list & instructions are in the recipe card at the end of this post, here are a few additional step-by-step photos, tips, and tricks to help you make the perfect homemade baked apple cider donuts!

What really made these eggless & dairy-free donuts go from good to great is the first step of the recipe- reducing the apple cider.

This was a trick I actually first stumbled across in Taste of Home's apple cider doughnut recipe, so I knew I had to try it when making my vegan version.

The best part about vegan donuts is they can easily be made in ONE BOWL! I like to mix the wet ingredients first including apple cider, apple sauce, oil, vanilla, and sugar.

P.S- when it comes to oil I prefer melted coconut or olive oil for this recipe, but any oil works (or even applesauce if you need to keep this recipe oil-free).

Then, I add in the dry ingredients including the pastry flour, salt, cinnamon, baking powder, and baking soda. I like to use pastry flour in my Vegan Cake and Cupcake recipes as it leads to the best texture.

How to make homemade pastry flour:

Here's a quick tip- if you don't have any pastry flour, you can make a version similar to it at home. Simply measure 1 cup AP flour. Then, remove 2 Tbsp from the measured flour and replace it with 1 Tbsp cornstarch. Cornstarch is lighter and much lower in protein which helps you get closer to the protein % you would find in a store-bought pastry or cake flour.

In order to make these baked apple cider doughnuts, you need a donut pan. My favorite is the Wilton Donut Pan as it's non-stick and so easy to clean. I like to spoon my batter into the pan, however, you can also add the doughnut batter to a piping bag and pipe it into the donut pan for less mess.

Honestly, I'm not too keen on fried food, so this pan is worth it if you're ever going to bake donuts! Plus, after you buy this donut pan, you can make my Vegan Lemon Lavender Donuts or Vegan Champagne Donuts as your next vegan baked donut!

To make these vegan apple cider doughnuts perfect, roll them in a mixture of cinnamon and sugar TWICE for ultimate Fall flavor!

Why roll the donuts in cinnamon sugar twice?

Honestly, just to get more cinnamon and sugar to stick!

First, I very lightly glaze my donuts with coconut oil or melted vegan butter to give them more sticking power. Then, I dunk them into a separate bowl filled with cinnamon sugar and swirl them around until coated.

Yep! Just replace the oil in the batter for applesauce or plant-based yogurt. Do keep in mind, this makes the donuts denser, but it still works. Also, you can still dip the donuts in cinnamon sugar without oil, but it will not stick the same.

I haven't tried it, but if you do please only use a GF 1:1 Baking mix. Flour alternatives like almond, coconut, or cassava cannot be subbed 1:1 in this recipe as they do not bake the same.

Can I bake donuts in a muffin pan?

I personally haven't tried it, but it should work! Just keep in mind, you will need to fill cupcake liners ⅔ full with batter.

How do I store baked vegan donuts?

This recipe makes a pretty small batch of donuts (6-8), however, you may have leftovers! In this case, they can be stored in a closed container at room temperature for 2-3 days or in the freezer for 1 month.

For the best results, store between layers of parchment paper. Also, these donuts can technically be stored in the fridge for 3-5 days, but it will dry them out so I do not recommend it.

I truly can't wait for you all to fall head over heels in love with these Baked Vegan Apple Cider Donuts! They are so easy to make (hello one bowl recipes!), fluffy, ridiculously flavorful, and have the perfect cinnamon sugar topping. Fall just isn't complete without apple picking & a batch of these vegan donuts!

More vegan desserts perfect for Fall you will love: 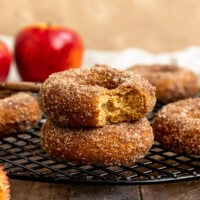