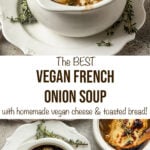 This Vegan French Onion Soup tastes just like the classic while being dairy-free & meatless! It's made with a rich & savory mushroom broth, caramelized onions, buttery toast, and melty vegan mozzarella for the best vegetarian soup recipe.

Traditionally, French Onion soup is not vegan. In fact, it is not even vegetarian since it is usually made with beef broth and Worcestershire sauce which has anchovies in it. Traditional French onion soup also contains broiled gruyere cheese on top.

Luckily, it's totally possible to make a delicious and hearty vegan french onion soup that tastes just like the classic we all love!

The very first step to making this soup is to caramelize the onions. To do this, chop up the onions very thinly. When doing this, just make sure they're all the same size and width so they cook evenly.

Melt the vegan butter in a large soup pot or dutch oven (I used my Le Creuset Dutch Oven) and then add in the onion slices. After that cook for 25-40 minutes over medium heat until they are caramelized.

Cooking over medium heat leads to a "quick" caramelized onion that doesn't need as much cooking time. However, if you want them even more caramelized you can cook for 1-2 hours at low heat until they are super dark brown.

It's super important to stir the onions consistently during this process and cook the onions at a lower heat. If the heat is too high, the onions may burn which would make the soup bitter.

Once the onions are caramelized add in the minced garlic, dried parsley, dried thyme, salt, & pepper. Then saute everything another 2-3 minutes until the garlic is fragrant.

I chose to use white wine, specifically sauvignon blanc, for this recipe. However, red wine also works! Add it to the pot of hot veggies to deglaze the pan and remove any stuck bits from the bottom.

Then, mix and continue cooking for another 2 minutes or so before adding in the broth.

P.S- If you're trying to avoid cooking with wine, just substitute it with a bit more veggie broth to deglaze. It will slightly change the flavor of this veggie french onion soup, but still be delicious.

A lot of vegan french onion soup calls for vegetable broth, but if you can get your hands on it mushroom broth is SO much better for this soup.

It is closer in flavor to a traditional beef broth and really gives the soup an umami flavor.

We're also adding Worcestershire sauce to give this vegan onion soup an extra boost of flavor.

Once all the soup ingredients are in, mix everything together and bring to a boil. Then reduce the heat to a simmer, cover the pot with a lid, and cook for another 10 minutes.

Ladle the french onion soup into 4 oven-safe bowls. These are the porcelain french onion bowls I used for this recipe.

To make the toast I bought a baguette from the store, sliced & buttered it, and toasted it in a pan.

Then, I topped it with my homemade vegan mozzarella cheese. However, you can totally use store-bought cheese if that is easier for you!

After that add the bowls to a baking tray and broil them in the oven for around 5 minutes. This will brown the cheese giving it that perfect texture and flavor. If you don't have a broiler setting, you can bake the bowls of soup for about 15-20 minutes for a similar result.

To serve this vegan onion soup, top the soup with fresh thyme. Then, dig in while it's still warm and the cheese is nice and melty on top!

Of course! You can use any gluten-free bread in place of the sourdough toast. Just make sure it's toasted before adding it to the soup for the best flavor.

You'll also want to use a different brand of Worcestershire sauce since the one I recommended does contain wheat.

How should I serve this soup?

This soup is honestly great on its own and pretty filling with the bread and cheese on top. However, if you're looking for other dishes to serve with my Quinoa Arugula Salad, Caramelized Onion Mashed Potatoes, or Whole Roasted Cauliflower are three personal favorites!

How do I store french onion soup?

The leftover soup should be stored without the bread and vegan cheese as these will get soggy if left to sit too long and are best enjoyed freshly baked into the soup.

The brothy soup can be stored in a closed container for 3-4 days in the fridge and for up to 1 month in the freezer.

I recommend letting the soup thaw in the refrigerator overnight before reheating. Then, just reheat in a microwave-safe dish or on the stovetop over medium heat until warmed throughout.

This Vegan French Onion Soup is truly a win for vegetarians & vegans alike! It's hearty, comforting, and so darn delicious. Enjoy! 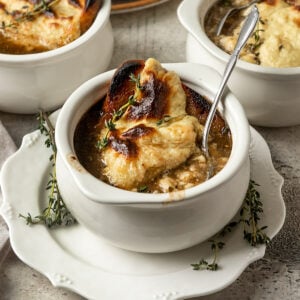