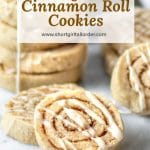 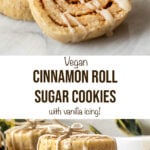 It's the best time of the year because Cookie Season is finally here! So get ready to make these VEGAN CINNAMON ROLL COOKIES for every holiday party, cookie swap, or as a gift for friends. I promise these eggless & dairy-free cinnamon swirl cookies will be a hit for every Holiday celebration.

I originally got the idea to make these cinnamon swirl cookies from one of my favorite dessert bloggers who made a similar recipe for her blog at Sally's Baking Addiction. After seeing her recipe, I knew I needed a vegan version of these beautiful cinnamon roll sugar cookies!

First, cream the butter and sugar

This leads to a really great texture in the dough because it helps incorporate air into the batter. Plus, it gives the dough some of the crucial structure vegan baked goods need because of the lack of eggs.

Please note that these cinnamon pinwheel cookies will not work with warm or melted butter!

First, add the flax egg and vanilla bean paste and mix them into the creamed butter and sugar.

Then, add in the dry ingredients including the flour, salt, and baking powder. I did use a little baking powder in this recipe to give the cookies a tiny lift compared to my Cranberry Pinwheel Cookies where I omitted it completely.

Once all the ingredients are in, mix into a thick cinnamon roll cookie dough.

Roll out the dough

Please- Do NOT freeze or chill the cinnamon cookie dough prior to rolling it out.

Freezing the dough prior to rolling it out leads to cracked cookie dough that will likely fall apart when you roll the dough. I made this mistake the first time I recipe tested these cookies. As you can imagine it was a big, delicious mess (that I don't recommend repeating!).

My favorite way to roll out the sugar cookie dough is to place it between two sheets of parchment paper. Then, use a rolling pin to roll out the dough. This prevents any sticking and will make sure you don't have a dough that is too dry with extra flour.

I followed this same process to make my Vegan Pumpkin Charcoal Pinwheel Cookies and Vegan Cranberry Orange Cookies too! While rolling the cinnamon sugar cookie dough out on a well-floured surface works, this method is definitely easier!

This is really just a mix of brown sugar and ground cinnamon. Mix it together in a small bowl and then spread it evenly over the dough.

P.S- I did try to incorporate melted vegan butter into the cinnamon swirl filling like in a traditional cinnamon roll. However, I found it warmed my dough too much and made it incredibly hard to roll into a log.

This step can be a little challenging, so hopefully, these process shots help you out!

First, add the cinnamon sugar filling to the rolled-out dough and spread it evenly to coat the dough. Then, use the parchment paper to gently roll the cookie dough into a log. It's really similar to how you would make my Vegan Cinnamon Rolls, except the dough is a little more delicate to work with.

The key is to make sure to tightly roll the dough as you go. Leaving air pockets will lead to cookies that spread while baking.

Freeze the dough, then slice

Once you've rolled the cinnamon roll sugar cookie dough into a large log, you'll want to freeze the dough for about 10 minutes or refrigerate for 15-20 minutes.

Once the dough has frozen, use a very sharp knife to slice into 16 evenly sized cookies.

Take those perfectly sliced cinnamon sugar cookies and add them to a baking tray lined with parchment paper. Then bake for 12-14 minutes until cooked through.

Once the vegan cinnamon cookies are done baking, remove the tray from the oven and let the cookies cool on the baking sheet for 10 minutes.

They will still be a little soft right out of the oven, so letting them cool on the baking sheet helps the cookies firm up & stay together. Then, move them to a wire rack to cool completely before adding any glaze.

To make the glaze, just add powdered sugar, oat milk. and vanilla bean paste to a small bowl and whisk together until a thick glaze forms. You actually want the glaze to be pretty thick!

After putting the glaze on these eggless cinnamon cookies, make sure to let them sit at room temperature for at least 30 minutes or in the fridge for about 10 minutes so the glaze can harden.

Definitely! Just use a 1:1 GF flour mix like Bob's Red Mill or King Arthur. Unfortunately, you cannot substitute other flour alternatives such as oat flour, coconut flour, or almond flour for this recipe.

Yes! They won't be quite as sweet (and it will slightly change the color of the cookie dough) but you can substitute coconut sugar or maple sugar for the white sugar and brown sugar in this recipe. Just make sure to use granulated sugar.

I hope you enjoy every bite of these Vegan Cinnamon Roll Cookies. I've brought these vegan cinnamon bun cookies to all different types of holiday celebrations and they are always a hit. Enjoy! 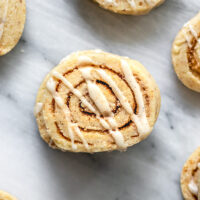