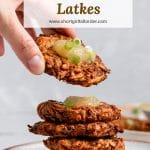 I am BEYOND excited to bring you this recipe for my favorite Jewish comfort food- Vegan Potato Latkes! Though Jewish food isn't traditionally vegan, I was able to perfect the best vegan potato pancake recipe that is perfect for Hanukkah, Rosh Hashanah, or any holiday.

My quest to veganize all my favorite Jewish food recipes started with my Vegan Matzo Ball Soup last year. Now, I'm excited to bring you a second vegan Jewish recipe with these easy vegan latkes!

How to make latkes from scratch

When making this recipe, I knew I wanted these vegan latkes to taste as close to the traditional potato pancakes I grew up eating at Hanukkah. To truly make these latkes authentic, this meant frying them!

Though some people may like the skin removed from potatoes, I keep the skin on as I think it provides more flavor AND it saves time! Win, win in my book. I also prefer to hand grate my latkes, but if that's not your style a food processor works too!

Plus this is the part where you add in 1 of 2 secret ingredients to the perfect latke. Can you guess what it is? If you guessed onions, you're right! There's something SO good about a little onion in a fried latke.

Next, Strain the Grated Potato & Onions

Once the potatoes and onions are grated and mixed together, you're going to want to strain the liquid out into a bowl. This is truly KEY to crispy latkes.

I actually use a nut milk bag for this step, but a cheesecloth also works. Make sure to strain the liquid into a bowl and set it aside as you'll want to save the starch that settles at the bottom. Aka- don't dump out this bowl of brown liquid yet!

To Finish, Add All The Ingredients to One Bowl

Take the strained grated potatoes & onions and add them to a large mixing bowl. Then, add in the rest of the ingredients including the flour, flax eggs, salt, pepper, parsley, and garlic powder.

At this point, you're also going to dump out the water that was strained from the potatoes. At the bottom of the bowl, there will be a layer of potato starch.

Scrape the starch out of the bowl and add it to your bowl with the other ingredients. This is secret ingredient number TWO to the perfect crispy vegan latke.

How to fry vegan latkes:

Once the batter is ready, the second step is frying the eggless potato pancakes. Here are a few tips for frying crispy potato latkes every time!

What are the best potatoes for latkes?

Since you want starchy potatoes (not waxy) I recommend using russet, Idaho, or Yukon gold potatoes. The potatoes you see pictured in my recipe are russet potatoes.

Can I vegan latkes gluten-free?

Yes! While I have not tested them myself, a 1:1 gluten-free flour mix should work well. The most important part of crispy latkes is the potatoes and potato starch which is naturally gluten-free.

What should the batter consistency be?

The latke batter should be slightly sticky, but not too wet. It also should definitely not be dry and should stick together. If that's not the case, add in a little more almond milk (1-2 Tbsp maximum).

Can I prep latke batter ahead of time?

Unfortunately, not for this recipe. If you let the potato batter sit for too long, it will turn brown. While it is still edible, it doesn't look great so I really recommend making this latke batter when you are ready to cook the latkes.

How do I store vegan potato pancakes?

Latkes will keep in the fridge for 4-5 days. I like to store them in a closed container between paper towels so they don't get too soft in the fridge. Make sure to store any toppings in a separate container as well.

To reheat, either microwave for 30 seconds-1 minute or reheat in a pan (without oil) for 2-3 minutes on each side.

What can I put on top of latkes?

I love to top mine with organic applesauce and sliced green onions (scallions). It's also traditional to put sour cream on potato pancakes. There are a ton of plant-based sour creams popping up in stores, but if you can't find any this vegan sour cream recipe is a good one. If you want to do something different, a few of my friends love them with tzatziki which also sounds fabulous!

These Vegan Potato Latkes make the BEST addition to any Hanukkah party (vegan or not!). I swear these eggless latkes taste just like the traditional ones I grew up eating. Enjoy!

More Vegan & Vegetarian Side Dishes you will love: 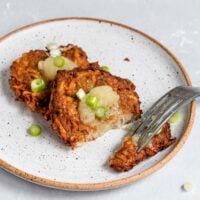