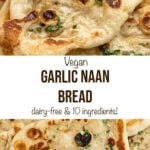 We are using vegan yogurt to create the best, soft, fluffy, & utterly delicious Vegan Garlic Naan Bread! With just 10 simple ingredients, it's much easier to make homemade naan than you may think.

Naan is a chewy and delicious Indian bread that can be used to scoop up curries and gravies. Traditionally it gets cooked in a tandoor or clay oven, but most homemade naan is either oven-baked or pan-fried.

While it's traditionally made with yogurt, we use vegan yogurt in this recipe to keep it plant-based & dairy-free!

How to make vegan naan

First, add the active dried yeast and sugar to warm water and let it sit until it blooms. This is not you know it is working. The sugar also helps it bloom as the yeast eats sugar.

Next mix in the vegan yogurt and olive oil and mix. Add in the all-purpose flour, salt, and garlic powder. I recommend starting with 3 ¼ cups flour and adding more as needed while kneading.

Then, mix into a shaggy dough.

Add the dough to a standing mixer and use the bread hook to knead the dough until stretchy and elastic. This takes about 5 minutes in the standing mixer, but you can also do it by hand on a well-floured surface.

Add the kneaded naan dough to a well-oiled bowl, cover, and let rise for 1-2 hours or until doubled in size.

After the first rise, punch down the dough, stretch and fold it into a ball, and transfer it to a floured surface.

Next, separate the dough into 9 pieces and roll it into balls. Then, cover and let it rise for another 15 minutes. While this is happening, you can also mix the melted vegan butter and minced garlic in a bowl to make the garlic butter.

After that, roll each dough ball into a flat disc and get ready to cook!

How to cook naan

Add butter to a pan and let it heat. Once hot, add the naan to the pan one at a time and cook for 2-3 minutes until it puffs up and browns. While it is cooking, brush the raw dough side with the garlic butter mixture.

Then, flip over and cook on the other side for 1-2 additional minutes.

Transfer to a plate, coat with more of the garlic butter, and then top with freshly chopped cilantro to serve.

Can I make naan gluten-free?

I personally don't recommend it for this recipe or any yeasted bread recipe as gluten formation is necessary to form the dough. Instead, I'd recommend this recipe for gluten-free naan which is also yeast free.

How do I eat naan bread?

Naan bread is great on its own and served with many traditional Indian recipes where it is used to scoop up curries and gravies. I recommend serving it alongside my Chickpea Tomato Spinach Curry or Thai Basil Tofu Curry.

How do I store leftover vegan naan?

To reheat vegan naan, either place it in the oven at 200F and cook until warmed throughout or heat it on the stovetop or microwave until warmed.

I truly can't wait for you to try this fluffy and delicious Vegan Naan Bread. With 10 easy ingredients, it couldn't be easier to make! 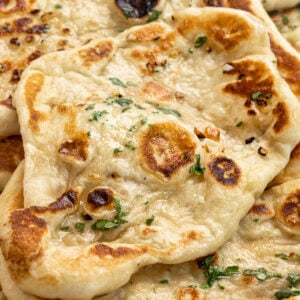