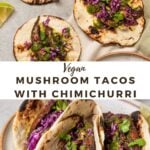 I am so excited to bring you these Portobello Mushroom Tacos with the easiest Cilantro Chimichurri Sauce. These vegan tacos come together in 40 minutes and are truly FILLED with flavor from the juicy portobello mushrooms to the tangy homemade chimichurri sauce.

The inspiration behind these tacos really comes from the craving for a "meatier" taco that is still vegan!

Luckily, portobello mushrooms provide the PERFECT texture to get that juicy meaty flavor while keeping everything plant-based. I like to pan-fry my portobello mushrooms, but they can also be grilled or baked- making this a truly versatile recipe for any kitchen!

The homemade spices used to marinate the portobello mushrooms are meant to imitate an asada sauce which you typically find on Mexican food like carne asada. To bring this epic taco recipe to the next level, I then made my own version of a chimichurri sauce, which is also traditionally served on steak, and paired it with mushrooms instead!

Like most of my Lunch & Dinner recipes on SGTO, these tacos can be whipped up in 30-40 minutes or less!

This is a mix of a few different spices like chili powder, garlic powder, salt, white pepper, cumin, avocado oil, and lime juice.

I know it can sometimes be intimidating to make your own spice mix, but I usually prefer it because it can lead to really unique flavors from pantry staples.

If for any reason you don't have these spices on hand, you can also sub the mix of spices for 1 Tbsp of taco seasoning mixed with the same amount of oil and lime juice.

I like to slice the mushrooms into 1" thick pieces and add them to a large bowl. Then I coat with the marinade using my hands so the spices get rubbed into the mushrooms.

At this point, it's time to pan-fry the mushrooms. You really want to do this step in a single layer, so it usually takes two rounds of cooking depends on your pan size.

I oil my skillet slightly (so the mushrooms don't stick) and then pan fry the mushrooms for about 3-5 minutes on each side until they are browned and have released a decent amount of liquid. Then, set aside on a plate for later.

P.S- I always use my Lodge skillet for pan-frying. It's the best and helps me to avoid chemicals from non-stick pans!

If you've never had chimichurri before, it is an Argentinian and Uruguayan sauce traditionally used to dress meat. Traditional chimichurri is made with parsley, oregano, garlic, vinegar, and spices. However, this is not a traditional recipe. We skip the oregano and instead use a LOT of cilantro plus some lime juice for a unique mix of flavors.

While traditional chimichurri is a bit chunkier and chopped, I went the easy route and threw everything into a food processor. I only blended it for a few seconds so it wasn't one big mush and still had plenty of texture, but this method makes for a much quicker recipe. If you don't have a blender or food processor, you can totally chop up all the ingredients by hand as well!

My biggest piece of advice when it comes to chimichurri? ALWAYS use fresh ingredients. That's how you get the best flavor.

How to assemble mushroom tacos

First, layer on a heaping Tbsp of avocado mash.

Then, layer on 2-3 portobello mushrooms. Don't add more or the tacos will be too stuffed to eat!

Next up, add on any fresh veggies. I chose to add shredded purple cabbage. However, shredded lettuce, shredded carrots, or even pickled onions would be amazing on these vegan mushroom tacos.

Finally, drizzle on the cilantro chimichurri sauce! I like to add about 1-2 tsp per taco, but add as much or as little as you would like!

Will these portobello tacos work with different mushrooms?

Yes! However, you're just going to sauté the mushrooms vs pan frying large slices.

Portobello mushrooms have a very different texture than other mushroom varieties and they also tend to be larger. This makes them easier to roast or pan fry in slices.

If you are using button mushrooms or cremini mushrooms, slice them thinly and coat them in seasoning. Then, sauté them in a pan until they are crisp and the juices have been released.

How do I grill or roast portobello mushrooms?

If you'd like to grill the mushrooms instead of pan-frying them, marinate 3 whole portobello mushrooms and grill them for about 5 minutes on each side. Then, cut each mushroom into slices AFTER they are cooked.

Are these mushroom tacos gluten-free?

I did use flour tortillas so technically the tacos you see pictured here are not. However, you can easily swap those out for corn tortillas and the rest of the recipe is entirely gluten-free, vegan, u0026 dairy-free. Wahoo!

How do I store portobello mushroom tacos?

To store leftovers, you're going to want to store the mushrooms and chimichurri in separate containers.

The mushrooms can be stored in a closed container in the fridge for 1-2 days. They don't freeze well.

Chimichurri sauce can be stored in the fridge for up to 1 week. I haven't tried freezing it, but if you do I imagine freezing it in ice cube trays and then storing it in a freezer-safe container once frozen would work best.

The smashed avocado does not store well and is best to make fresh!

I truly hope you enjoy these delicious Vegan Portobello Mushroom Tacos with Cilantro Chimichurri sauce! Whether you pan-fry, roast, or grill the mushrooms for this recipe- they truly make the best vegan taco meat. Enjoy this summertime fave!

More easy 30 minute recipes you can make for dinner: 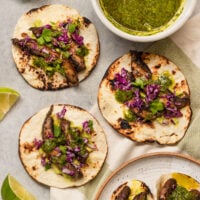